Schothorst wins race three at Most 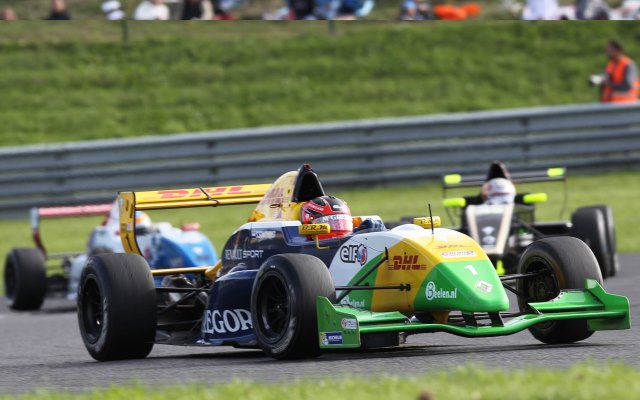 Steijn Schothorst claimed the honours in the third and final Formula Renault 2.0 NEC race of the weekend at Most in the Czech Republic.

Starting second on the grid, the Dutch driver got the jump on Andrea Pizzitola to take the lead, where he stayed for the rest of the race.

Alex Albon continued his efforts from the opening two races by climbing from seventh on the grid to take second on the second lap, finishing 1.7 seconds behind Schothorst.

After winning both of the earlier races, Eurocup points leader Oliver Rowland was forced to settle for third place in the finale after starting from fifth.

After starting third Jack Aitken fell towards the back due to a first lap incident, recovering to 12th. That was enough to eat a further nine points into the advantage of championship leader Matt Parry, who completed a point-less weekend. Having to start from the back after his first race retirement, he was making his way forward together with Aitken when a puncture forced him to pit and finish a lap down in 26th.

75 points is now the difference between Parry and Aitken, down from 121 at the start of the weekend. 30 points are available from each of the three Zandvoort races in October.