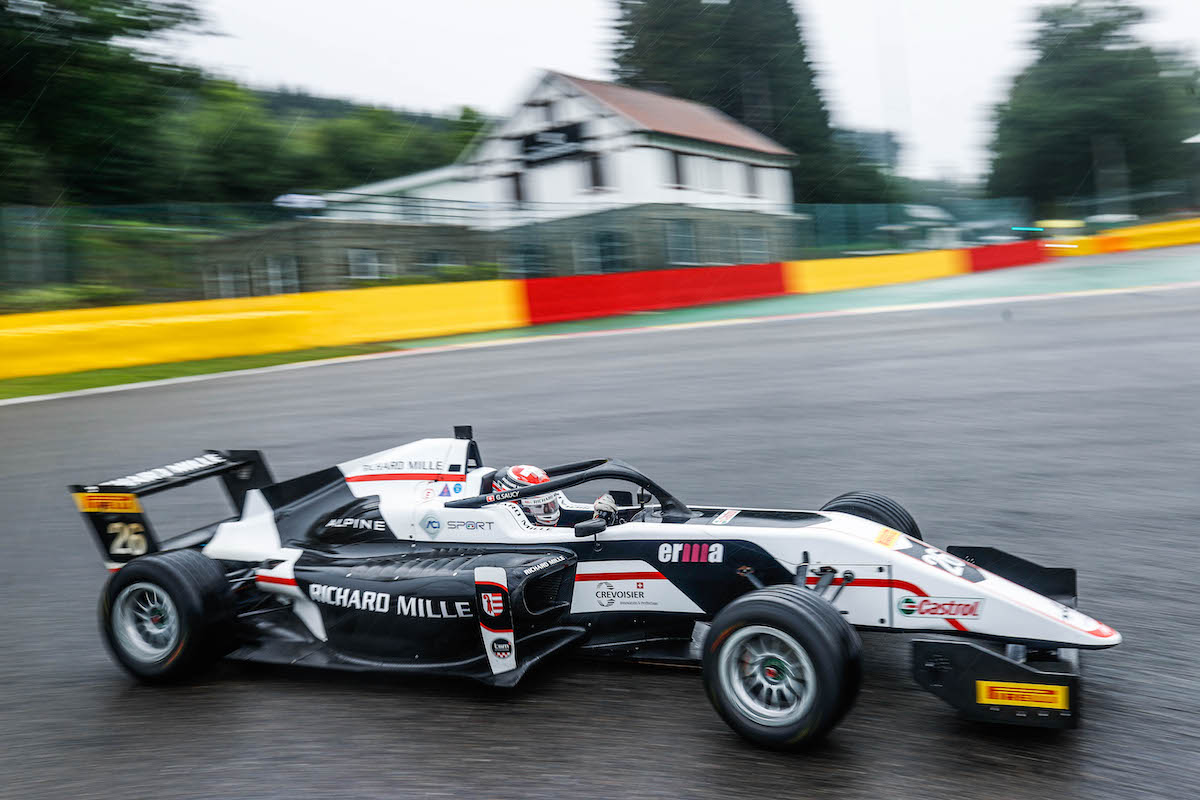 Gregoire Saucy continued his dominance of the Formula Regional European Championship by Alpine in first qualifying at Spa-Francorchamps.

ART Grand Prix driver Saucy will start race two on Sunday from pole position, the fifth he has claimed in succession and eighth in total this season.

With rain clouds threatening overhead, all the drivers took to the circuit as soon as the lights went green to try to get in a dry lap. As they jostled for position around the circuit, an off from Oliver Goethe at Les Combes brought out a red flag before any times had been set.

The interruption gave the teams the chance to put on wet tyres and make minor set-up changes for the remaining 13 minutes of session.

Saucy’s team-mate, Gabriele Mini, briefly topped the timesheets. But Saucy, running right behind him, crossed the line to go fastest with a time of 2:35.363. On his next lap Saucy was blocked by Nicola Marinangeli at Campus. With the rain getting heavier, he was unable to improve further.

David Vidales was fastest of the Prema Powerteam drivers and ran towards the front throughout the session. A late improvement by Mini relegated Vidales to third.

Hadrien David (R-ace GP) maintained his strong form from testing to take fourth. Zane Maloney set the initial pace for R-ace GP with two quick laps in succession. However, he appeared to get caught in traffic on his last lap and had to settle for fifth.

Franco Colapinto recovered from a spin across the tarmac run-off at Pouhon to take eighth for MP Motorsport.

Friday’s pacesetter, Michael Belov, never challenged at the front of the field. After being outside the top 20 with four minutes remaining, the G4 Racing driver finally recovered to take 11th, immediately behind impressive debutant Dexter Patterson (Monolite Racing).

Isack Hadjar, third in the championship, had to make do with 16th place for R-ace GP, with Alex Quinn only 21st for Arden – two spots in front of Prema’s Ferrari junior Dino Beganovic.