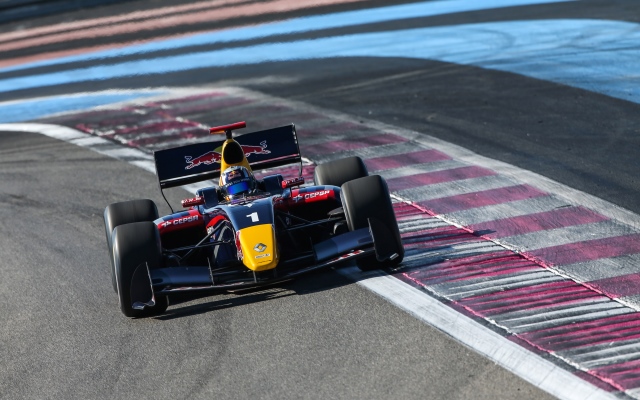 Carlos Sainz regained the momentum in the Formula Renault 3.5 title battle with a commanding lights-to-flag win in race one at Paul Ricard.

The Spanish driver got a great start to the race from pole position, although a safety car prevented him from opening up an early advantage.

After the restart, he quickly pulled two seconds ahead of Red Bull Junior stable-mate Pierre Gasly. The Frenchman was able to keep the gap stable for a while after that and even claimed fastest lap honours, but Sainz finished up 4.5 seconds clear.

Oliver Rowland rocketed off the line to get from eighth to third by the first corner, but was then suffered a puncture after Matthieu Vaxiviere locked up, slide wide of the turn one apex and clipped Rowland’s rear-left tyre.

Rowland was able to pit for fresh rubber and fight his way up to 13th place – surviving contact with Meindert van Buuren and a lengthy battle with Esteban Ocon – but has now dropped out of mathematical title contention with three races left.

Vaxiviere had a quiet run to third after that incident, while Sergey Sirotkin took fourth after passing a slow-starting Roberto Merhi at the start. Merhi’s fifth place sees him drop from 16 points behind Sainz to 31. Gasly is the only driver now who can stop the two Spaniards, but is 48 points adrift of Sainz.

Marlon Stockinger was not far behind Merhi at the finish in sixth. Luca Ghiotto scored his first points since Spa in seventh, while Marco Sorensen held off Matias Laine for eighth. Sainz’s DAMS team-mate and Hungaroring winner Norman Nato recovered from a poor qualifying to take the final point in tenth, although only after contact with Zoel Amberg at the final corner.

The first-lap safety car was needed when the cars of Pietro Fantin and Jazeman Jaafar were left stranded on track.