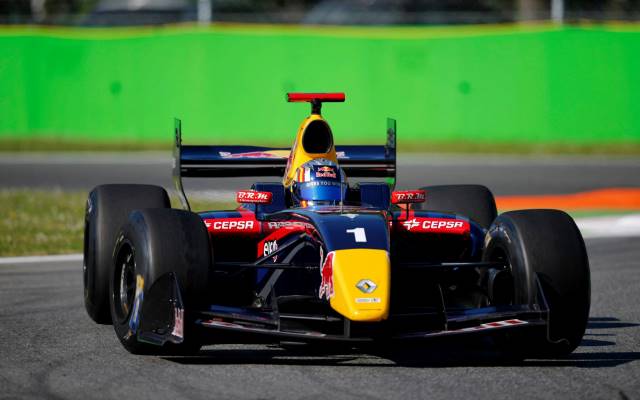 Carlos Sainz proved his Friday pace was representative as he claimed pole position for the opening race of the Formula Renault 3.5 season at Monza.

The Spaniard – who has replaced Kevin Magnussen at DAMS for 2014 – spent much of the session on top, constantly improving his time to get down to a 1m33.235 before an early halt was called by a red flag with 43 seconds left on the clock.

Will Buller – who was team-mate to Sainz at Zeta Corse at the end of last season – came closest to matching the Red Bull Junior, finishing 0.124s adrift for Arden.

Luca Ghiotto upstaged the bigger-name rookies to claim a superb third place for his debut on home soil with Draco. Will Stevens secured fourth – a good result in the context of the expected title contenders – while former DTM racer Roberto Merhi will start his first single-seater race for over two years from fifth.

Marlon Stockinger and Nikolay Martsenko went well to claim sixth and seventh, while Eurocup Formula Renault 2.0 champion Pierre Gasly will have to settle for eighth. Jazeman Jaafar was ninth with another debutant Matthieu Vaxiviere in tenth.

Marco Sorensen took 12th in Tech 1’s sole entry but it was an even worse session for Fortec. The British team has arguably the strongest driver pairing on paper, but Oliver Rowland and Sergey Sirotkin?could only manage 16th and 18th respectively having not looked in contention throughout the 30 minute session.