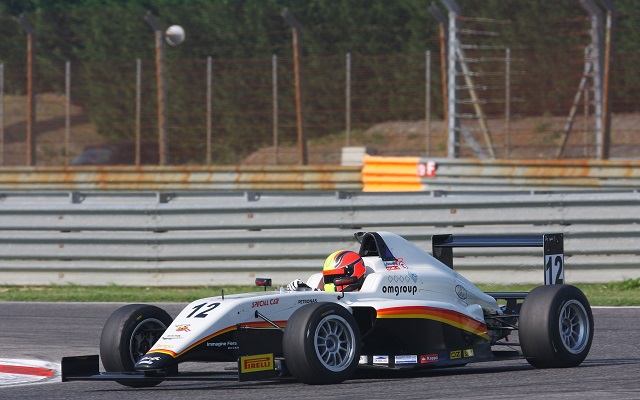 Andrea Russo became the third Italian F4 race winner in just as many races, having picked up a dominant victory at Adria.

As poleman Lance Stroll stalled on the grid at the start, Rosso managed a fantastic getaway and beat front row starer Brandon Maisano to the lead into turn one.

Stroll did get going, joining the field at the back, but the first lap did not go through without retirements as DAV’s Gustavo Bandeira was turned around and did not continue the race.

After lap one, Russo confidently led the race from Maisano, while race two winner Ukyo Sasahara snuck into third due to a stellar start from seventh on the grid. However, Sasahara’s car immediately started to show issues, as he was first passed by Mattia Drudi and then overtaken by teammate Leonardo Pulcini.

Ten minutes into the race, the top three – Russo, Maisano and Drudi – appeared to be pulling away from the rest at a rapid rate, with Drudi’s attempts on second allowing Russo to have plenty breathing space out front. Yet, seemingly out of nowhere, Drudi’s race came apart with a mechanical issue as he was overtaken by Pulcini, Sasahara and Alain Valente in the span of a few corners and went on to retire.

At that same point, Valente, who was languishing behind the struggling Sasahara, managed to finally pull off the move, entering what was now fourth place. Further down in the field, Canadian Stroll was making passes left and right and fought his way into the top ten.

With ten minutes to go, Sasahara called it a day, retiring with mechanical issues. His teammate Pulcini had no issues of the sort and caught up to Maisano for second. The duo ran nearly side by side for a couple of laps before Pulcini finally completed the move on lap 18.

Several minutes afterwards, Russo went on to claim his first victory in cars, finishing nine seconds ahead of Pulcini. Maisano narrowly held on to third ahead of Valente, with Prema’s Takashi Kasai picking up a solid fifth.