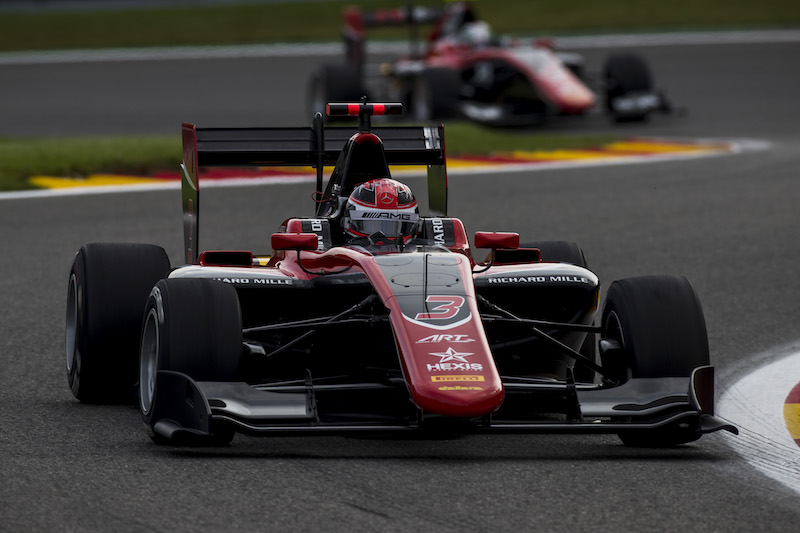 George Russell fought back against Nirei Fukuzumi to win the first GP3 race at Spa-Francorchamps and increase his championship lead.

From pole, Russell kept the lead into the first corner but was passed by fellow front-row starter Fukuzumi into Les Combes for the first time.

Fukuzumi led by 1.6 seconds before a virtual safety car was deployed on lap three after Bruno Baptista was sent into the barriers at Les Combes by contact from DAMS team-mate Tatiana Calderon.

At the restart, Russell was suddenly on Fukuzumi’s tail at Les Combes, and using DRS into La Source and then down the Kemmel Straight on the next lap, the Mercedes junior regained the lead.

As Fukuzumi scrapped with Jack Aitken over second place, Russell was able to open up a lead of 7.4 seconds on the way to his third win of the year.

Aitken took third away from Arjun Maini on the opening lap and passed Fukuzumi with a stunning move around the outside at Les Combes on lap seven of 17.

After dropping a second behind Aitken, Fukuzumi came back against the Renault Sport Academy ace, and got back past under braking for the Bus Stop chicane with only two laps left to run.

The Honda protege took a wide line on his way through Eau Rouge however, giving Aitken the run to seal second place for good into Les Combes.

Maini had a quiet run to fourth for Jenzer, not threatened by a trio of Trident cars behind him, led by Dorian Boccolacci who beat Ryan Tveter to sixth.

Giuliano Alesi kept up his strong form by working his way from 12th on the grid to finish seventh, putting himself on the front row for a shot at his third consecutive reversed-grid race win on Sunday.

Julien Falchero will start from pole after completing the top eight, with Niko Kari holding off Kevin Jorg for ninth.

Marcos Siebert was running ninth until retiring with apparent suspension damage with three laps to go.

From a lowly 17th on the grid, Anthoine Hubert was working his way back towards the points positions when he stopped on lap five.

It means all four ART drivers have now a suffered mechanical issue forcing them to retire from the opening race of one weekend this season, after Aitken, Fukuzumi and Russell had issues at Barcelona, Silverstone and the Hungaroring respectively.