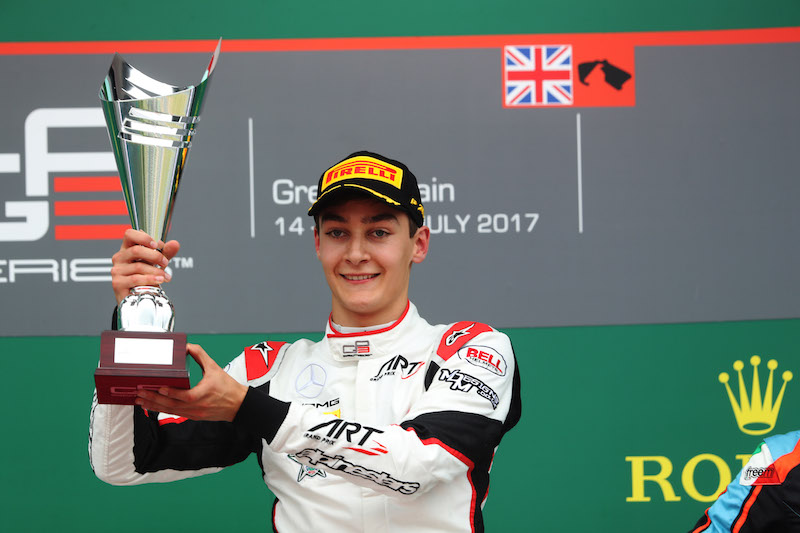 George Russell fought back against team-mate Anthoine Hubert to score a home GP3 win in race one at Silverstone.

It was Hubert that made the better start from second on the grid to grab the lead, followed by Nirei Fukuzumi and a fast-starting Jack Aitken to briefly make it an ART Grand Prix 1-2-3-4.

Arden-run Red Bull Junior Niko Kari quickly interrupted this though with a superb double move on Aitken and then Fukuzumi around the outside of Brooklands.

Fukuzumi, who led the championship before Russell’s pole position on Friday, then slowed to a halt and retired to the pits.

Hubert led by 1.1 seconds at the end of the first lap but was quickly reeled in by Russell, who got very close down the Hangar Straight on lap three using the DRS.

Exactly a lap later, with a superior exit off Chapel, Russell was able to make his move for the lead, completing it before they got to Stowe.

He gradually pulled out a 1.1s lead of his own before the virtual safety car was deployed on lap 15 of 20 after Ryan Tveter stopped by the side of the track on the old pit straight.

After the restart on the following lap, Russell’s advantage was only 0.7s, but he increased that once more to 1.1s by the finish.

Kari was close to the lead until the virtual safety car, when he was passed immediately on the restart by Alessio Lorandi.

Jenzer driver Lorandi went on to hassle Hubert, finishing only four tenths behind.

After his good start, Aitken lacked race pace and slipped back to sixth, but ended up back in fourth again after capitalising on a late fight between Kari and Dorian Boccolacci.

Trident’s Boccolacci went around the outside of Kari at Stowe and looked to have secured the place into Vale, only to run deep, and when he rejoined he tagged the passing Kari, knocking the Finn wide.

Aitken took the chance to nip past Kari and then grabbed fourth with a great late-braking move into Brooklands on the final lap.

This battle was joined at the end by Arjun Maini and Giuliano Alesi, who are set to form the front row for race two, with Alesi on pole a week after his second-place finish in Austria.