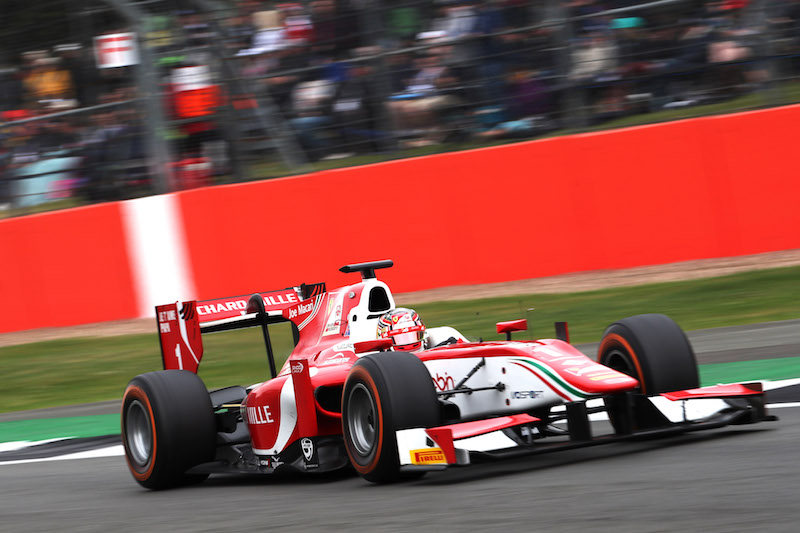 Charles Leclerc converted pole position into his fourth Formula 2 feature race win at Silverstone even though his race looked like it could be over at one stage when had smoke pouring from his car.

Leclerc made a good start to keep the lead from pole, as his closest championship rival Oliver Rowland didn’t get away so well from second and fell behind Norman Nato.

Ferrari junior Leclerc then set off at an extreme pace at the front of the field, leading by more than six seconds on lap six, at the end of which those behind him headed for the pits to swap soft tyres for the hard compound.

Before Leclerc could come into the pits on the following lap, smoke began to pour from the rear of his car, but he was able to continue without losing much speed and the issue did not reappear after he rejoined from the pits.

The only thing that might have worried him over the second stint was when his left wing mirror flew off down the Hangar Straight on lap 20 of 28, but he didn’t need it anyway.

The gap to Nato came down to just over four seconds as the early stoppers cleared slower traffic, but Leclerc once again stretched his legs in clear air to win by almost nine seconds.

Nato coped with race-long pressure from Rowland to score his first feature race podium since his second place in the season opener in Bahrain.

Jordan King started and ran fourth early on but he faded later on to seventh, behind Artem Markelov, Sergio Canamasas and Luca Ghiotto, who had another charging race from 12th on the grid.

Nicholas Latifi took eighth place and reverse grid pole for race two in front of Sean Gelael and Nobuharu Matsushita, who went from eighth to fifth off the line on the hard tyre and spent a large portion of the race in the lead but ultimately lacked pace on the alternate strategy.

There was an aborted start when Nyck de Vries complained of a loss of power when he arrived on the grid, leading to his retirement.

Alex Albon and debutant Callum Ilott – who had been due to make his first race start with a hand clutch – stalled after the additional formation lap was signalled, and although they were able to start from the pits, they finished at the back.