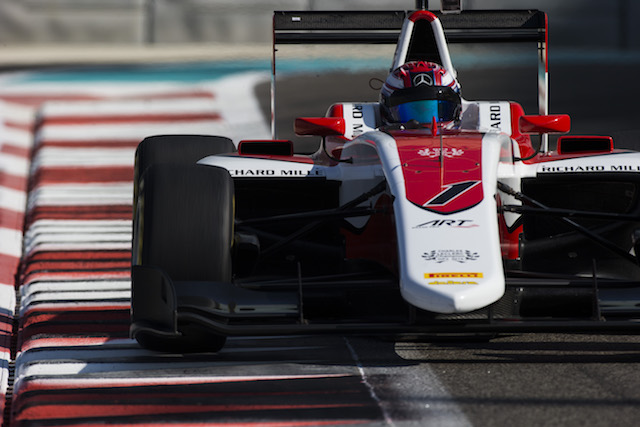 George Russell dominated the final day of the GP3 post-season test in Abu Dhabi as he prepares for his switch to the series as a new Mercedes Formula 1 development driver.

After sitting out the second day of the test, the Brit returned to the ART Grand Prix line-up and recorded the best time of the week during the morning session, a 1m55.364s.

He was fastest again in the afternoon, but nearly four tenths of a second off his earlier benchmark.

Thursday pacesetter Alessio Lorandi was third in the morning and then second in the afternoon with Jenzer Motorsport, 0.369s off Russell’s session-topping time.

In fourth, Formula Renault frontrunner?Max Defourny?had his best showing of the week after a switch from ART to Arden, with Euroformula Open champion?Leonardo Pulcini fifth after joining him from Campos.

After two days at ART,?Jack Aitken moved to DAMS and was sixth quickest ahead of ART tester?Arjun Maini, Jenzer’s?Steijn Schothorst?and?Kevin Jorg at Arden, with the top nine setting their bests in the morning.

Completing the top 10 for the day was Trident?Giuliano Alesi with his afternoon time, good enough for sixth in that session behind Pulcini, Maini and Ferrucci.