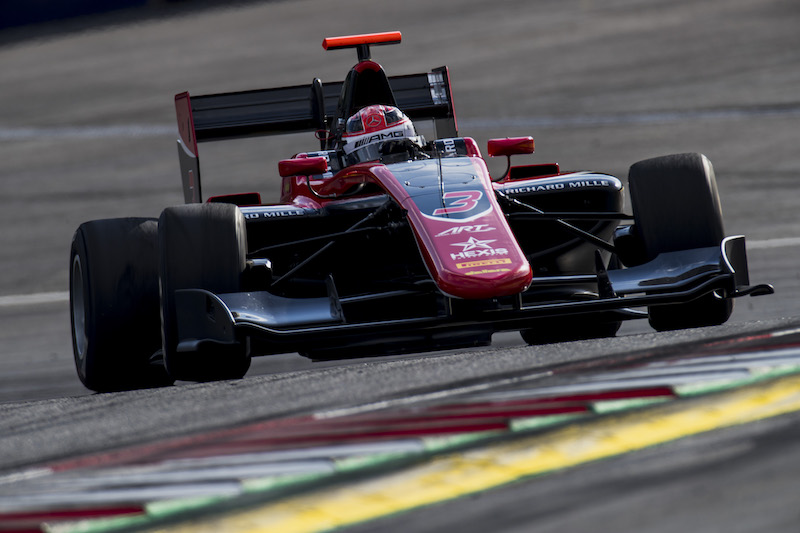 Aitken had been on top of the times following the first runs, with fellow ART drivers Nirei Fukuzumi and Russell both within a tenth of a second of his benchmark time.

Trident driver Dorian Boccolacci went early with his second run to break the ART dominance at the top with just under seven minutes remaining, but three minutes later Aitken had reclaimed top spot.

Arden’s Steijn Schothorst briefly snatched provisional pole with around three minutes to go but his effort was quickly bettered by Russell’s 1m19.114s.

That would be good enough for pole, with Aitken getting to within 0.072s with the best of his late efforts.

Championship leader Fukuzumi would not be as competitive in the latter part of the session and was pushed back to 10th, albeit only 0.37s down on pole in an ultra-close session.

Boccolacci was third, 0.141s down, just 0.003s ahead of Leonardo Pulcini, who grabbed fourth at the chequered flag at the expense of his team-mate Schothorst.

Giuliano Alesi and Raoul Hyman also put in last-lap improvements to go sixth and seventh, but the latter then had his time deleted.

Jenzer duo Alessio Lorandi and Arjun Maini – who took a double podium and a reverse-grid win respectively at the first round at Barcelona – were just outside the top 10 in 11th and 12th.

With the top 19 separated by only 0.758s, it was a poor session for DAMS with Bruno Baptista 16th, Santino Ferrucci 17th and Tatiana Calderon 19th.

Only Campos driver Marcos Siebert, who was fastest of all in Friday’s practice session, kept the French team from sweeping the bottom positions.