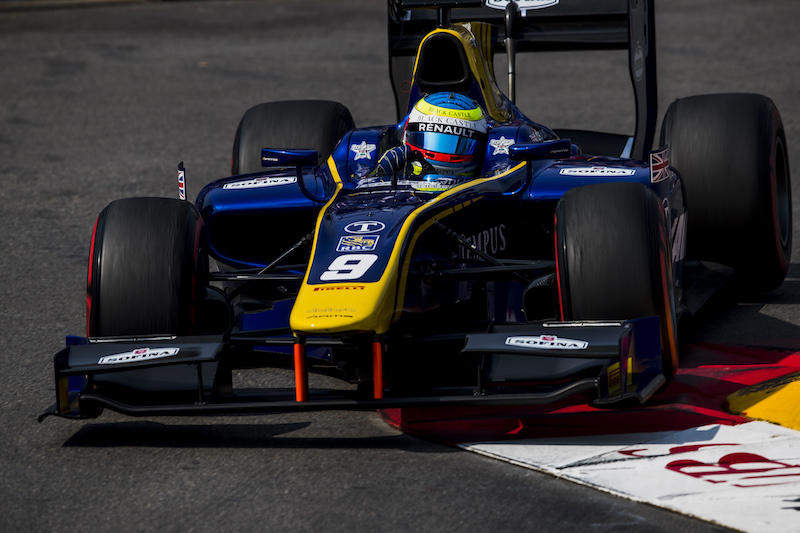 Oliver Rowland claimed his maiden Formula 2 win in a Monaco feature race which was controlled by local ace Charles Leclerc before he was foiled by a safety car,?then retired with broken suspension.

In his first race on his home streets, Leclerc kept the lead at the start despite wheelspin allowing Alex Albon to get alongside him on the run to Sainte Devote (having reported difficulty finding the clutch bite-point prior to the race).

After Albon threw the dice on strategy, swapping his soft tyres for supersofts under a lap-seven safety car, Leclerc quickly opened up a gap over Rowland of nearly seven seconds (and 25s over Albon) before pitting on lap 21 of 41.

That call was triggered by a collision between the returning Robert Visoiu and Louis Deletraz at Mirabeau, and the safety car was deployed for a second time soon after Leclerc headed to the pits.

It picked up Leclerc, while Rowland was freed to complete another lap before he pitted and then rejoined in the lead in front of the Monegasque driver, who was relegated to fourth behind Artem Markelov and Nobuharu Matsushita.

Significant vibration from Leclerc?s front-left wheel prompted him to pit at the restart in the belief his tyre was not on correctly, but the problem continued after he rejoined, leading to his retirement with suspected broken suspension.

Up front, Rowland was able to build a gap of more than one second over Markelov, although this came down to 0.6s at the chequered flag.

Matsushita finished 13s back in third place as he completed the podium, with ART team-mate Albon able to make his supersoft tyres last to take fourth.

Luca Ghiotto put in an entertaining drive ? including a great pass on Johnny Cecotto at Rascasse in the early stages ? on an alternate strategy to claim fifth in front of Gustav Malja, Nyck de Vries and Cecotto, with the two Rapax drivers set to share the front row for the sprint race.

Jordan King and Sergio Canamasas completed the scorers ahead of Antonio Fuoco, who was left behind together with Sean Gelael at an aborted start and forced to begin the race from the pits.