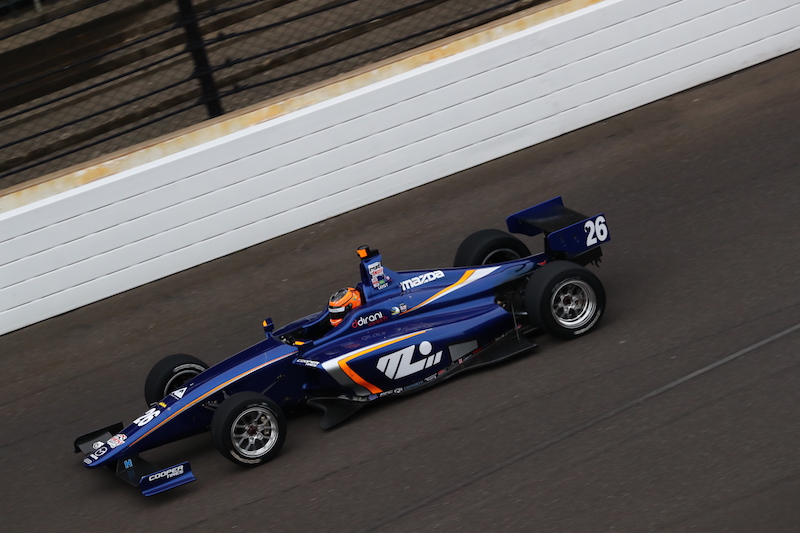 From pole position, Leist kept the lead at the start as the driver he beat in qualifying, his former MSA Formula rival Colton Herta, made contact with Dalton Kellett on his inside at Turn 2, sending him spinning and collecting Ryan Norman ? like Kellett, an Andretti team-mate of Herta?s.

After the restart, Leist built a gap as team-mates Zachary Claman De Melo and Neil Alberico briefly made it a Carlin 1-2-3.

Kellett worked his way up to second and did make inroads into Leist?s advantage, but it would be Aaron Telitz that provided the Brazlian?s biggest challenge after passing Kellett halfway through the 40-lap race.

With seven laps to go, Telitz went side-by-side outside Leist through the first two turns, but the reigning BRDC British Formula 3 champion stayed ahead, and Telitz was soon re-passed by Kellett.

Leist ? who scored his first Indy Lights podium in the second race of the Indianapolis road course event earlier this month – managed to stay out of the Canadian?s reach on the last lap and win by 0.7 seconds, as Telitz nabbed second place at the line.

Alberico finished fourth, a place he did briefly lose to a charging Santi Urrutia before the Uruguayan slowed with three laps remaining after tagging a wall.

Kyle Kaiser toiled to ninth but actually extended his championship lead by one point to 14 over Nico Jamin, who was 10th.

Telitz, Alberico and Herta are now tied for third, 29 off the lead and just two in front of Leist, with Urrutia and Claman De Melo both within 50 points of the lead.