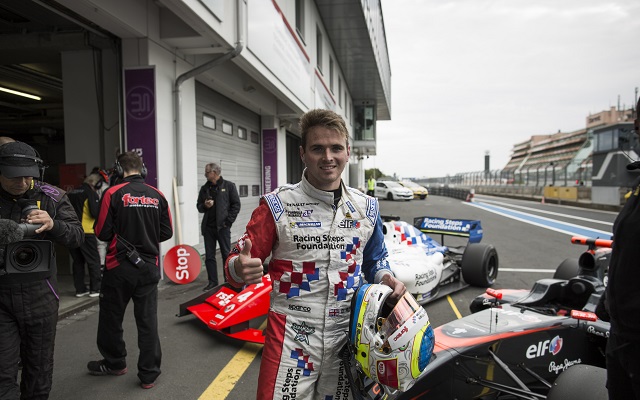 Oliver Rowland collected his sixth win of the season after leading every lap of the first Formula Renault 3.5 race at the Nurburgring.

The Briton had a great launch off the line to stay out of the fighting behind him, which saw Nyck de Vries passing and slightly forcing off Tom Dillmann and Tio Ellinas to take second.

As a result, they were down to fifth and sixth as?Jazeman Jaafar and Matthieu Vaxiviere managed to sneak past as well.

As the race went on, Rowland and De Vries both established safe leads with Vaxiviere closing in on Jaafar before the safety car made an appearance.

Nicholas Latifi, who was trying to overtake Alfonso Celis for several laps spun out at turn one after a desperate move and he was soon joined by Bruno Bonifacio, whose car narrowly avoided crashing into the Canadian.

Once the safety car left the track, Rowland and De Vries easily pulled away from the rest of the field to take first and second by more then ten seconds in the clear.

Jaafar and Vaxiviere continued where they left off before the race?had been neutralized but the Frenchman struggled to get close enough. His moment came three laps before the checkered flag in a turn one overtake but he slightly overshot his move which allowed Jaafar to come back and claim his first podium since May.

Vaxiviere had to settle for fourth and lose a further 13 points in the title fight, while Dillmann and Ellinas ended the race not far behind the Lotus driver.

Pietro Fantin and Gustav Malja grabbed seventh and eighth respectively and the top ten was completed by Egor Orudzhev and Alfonso Celis.

Yu Kanamaru had a promising debut race in the series as the Pons driver was running ninth before the safety car but then lost three positions in the first couple of laps after the restart.

Dean Stoneman suffered his third retirement in the past four races with yet another technical problem.