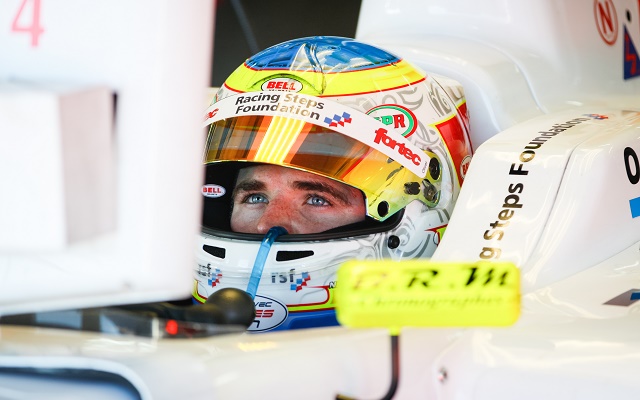 Formula Renault 3.5 pre-season favorite Oliver Rowland took his third victory in the series in the opening race of 2015 at Motorland Aragon.

He started from second and crossed the line in second, but inherited the win with Meindert van Buuren penalised for jumping the start.

The grid was in for a big change an hour before the start when Gustav Malja was excluded for a technical infringement, promoting Rowland to the front row alongside Matthieu Vaxiviere.

The Frenchman went into the race yet to lose in any session during the weekend and seemed the odds-on favorite to win. But he didn’t have a good getaway off the line and Rowland managed to go level with him even before T1.

However, van Buuren, making a seemingly superb start, split the two of them into turn one and emerged as the leader.

Rowland held second, while Vaxiviere was hung out to dry on the outside, dropping behind Jazeman Jaafar and then letting Dean Stoneman through as well.

Further down the field, there was contact into turn one, with Sean Gelael retiring on the spot and Roy Nissany forced into the pits.

But there was no safety car and, in the lead, van Buuren stepped on the gas, immediately making up a huge gap to Rowland.

The Dutchman was four seconds in the clear but was found to have committed a rather blatant jump start off the line and was handed a 20-second post-race penalty.

With van Buuren making up a further 16 seconds on Rowland out of the question, the Briton was effectively in the race lead.

He had teammate Jaafar not far behind, but the Malaysian hardly seemed eager to make any big moves early on in the race.

But when the Lotus driver ahead of them started easing off, Jaafar briefly featured in Rowland’s rear view mirrors before eventually dropping off off, seemingly content with completing a Fortec 1-2.

Stoneman and Vaxiviere, meanwhile, were involved in a race-long fight behind the Fortec duo. The Frenchman seemed quicker for much of the distance but could not find a way past the Red Bull junior, allowing Stoneman to take a podium finish on his Formula Renault 3.5 debut.

Tom Dillmann, heading returnees Carlin, was passed by Nicholas Latifi on the final lap and had hold off a recovering Malja for ninth.

It was a long, miserable race for big name Roberto Merhi, who was fighting Bruno Bonifacio for position outside of the points. Their battle was briefly interrupted by Nissany’s attempts to unlap himself, but the Israeli eventually dropped off and Bonifacio passed the Spaniard with little trouble.

Merhi eventually called it a day in the pits with four minutes remaining on the clock.

Louis Deletraz cruises to victory in first Eurocup race of 2015