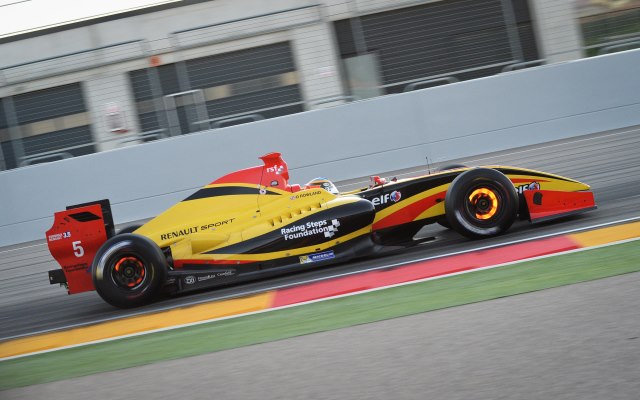 Oliver Rowland will race in Formula Renault 3.5 next season with Fortec, his backers at the Racing Steps Foundation have confirmed.

Rowland finished runner-up in this year’s Eurocup Formula Renault 2.0 and will follow Robin Frijns and Stoffel Vandoorne in making the step up to the World Series by Renault’s premier category with Fortec.

He tested with the British outfit in Barcelona and Aragon, as well as sampling GP3 in Abu Dhabi.

Rowland spent three years in Formula Renault 2.0, finishing second in the UK series in 2011 and third in the Eurocup in 2012 – both with Fortec – before switching to Manor MP for 2013.

“Formula Renault 3.5 with a top team like Fortec is a fantastic opportunity for me,” said the 21-year-old. “I can’t thank the Foundation enough for the continued backing they are providing me with.

“I think my style of driving is well-suited to the car and, together with Fortec, I know we have what it takes to challenge for wins and the title.

“Clearly it’s not going to be easy but they won the title in 2012 with Robin Frijns in his rookie year and were runners-up this year with Stoffel Vandoorne, who was also a rookie, which shows it’s perfectly possible.”

Pierre Gasly, who beat Rowland to the Eurocup crown, will also move in FR3.5 with Arden Caterham as part of the Red Bull Junior Team.

The Racing Steps Foundation has also announced that Ben Barnicoat will contest his first season of car racing in Formula Renault 2.0 NEC, while Jake Dennis and Jack Harvey are closing on deals to compete in the FIA F3 European Championship and Indy Lights respectively. James Calado has graduated from the RSF after finishing third in GP2 and joining Force India as reserve driver.