Roundup: Second wins of the season for Cecotto and Calado

There were off-weekends for the title rivals in GP2 at Hockenheim, while in GP3 Patric Niederhauser grabbed another win and Mitch Evans extended his advantage…

A damp track saw most of the field start on wets for the feature race in Hockenheim, but a gamble by Johnny Cecotto to start on slicks paid off big time. As the track dried out quickly, Cecotto drove his way through the field while everyone else headed for the pits. When Cecotto eventually made his mandatory stop he stayed out in the lead to win his second feature race of the season. Fabio Leimer took second, ahead of Stephane Richelmi – the only other man to start on slicks.

Felipe Nasr took fourth ahead of polesitter Giedo van der Garde, while Nigel Melker slipped to sixth after flying into the lead in the difficult conditions at the start. Points leader Luiz Razia was seventh, with James Calado taking eighth and the reverse grid pole.

The Racing Steps driver drove away in the sprint race to make a well-earned return to the top step of the podium after his win in Malaysia. Van der Garde was second, with Nasr completing a fine weekend with third. Leimer was fourth ahead of Esteban Gutierrez and Cecotto. Post-race penalties promoted Razia’s rival Davide Valsecchi to seventh, after an earlier spin. Razia too spun and dropped to the back on the first lap before recovering to tenth.

Razia leads Valsecchi by ten points, and despite their bad weekends they’re still more than 30 points clear of anyone else – Gutierrez’s weekend hampered by a grid penalty for a Silverstone collision. The season continues this weekend at the Hungaroring.

Heavy rain caused the first race to start behind the safety car, but a number of drivers were still on slicks, including front row starters Daniel Abt and Mitch Evans. Those driver then came in to change to wet tyres, but with conditions worsening the race was then red-flagged. Conor Daly led when the race eventually got back underway, but he was passed for the lead by Patric Niederhauser, who was able to add to his victory from Race 2 in Valencia.

Kevin Ceccon completed the podium on the road but was later penalised for not having his tyres fitted in time at the start of the race. That meant that fellow Italian Giovanni Venturini finished third on just his second weekend in the series. Matias Laine was fourth, while the conditions helped fellow Finn Aaro Vainio to recover from a grid penalty and finish fifth, ahead of his title rival Evans. Tamas Pal Kiss was sixth, with Abt and Evans recovering to seventh and eighth.

Abt beat Evans off the line in race two to take the lead, before a lengthy safety car period as Vicky Piria received medical attention after an aerial crash at the hairpin. At the restart Evans retook the lead from Abt, before another safety car period after Fabiano Machado took to the air after running wide at turn one. Evans crossed the line to take his third win of the season, ahead of Abt and Daly. Pal Kiss, Laine, Vainio, Tio Ellinas and Venturini.

The win extended Evans’ lead over Vainio to 18 points, with Abt, Niederhauser and Daly separated by just one point in the battle for third. The Hungaroring hosts round six of eight. 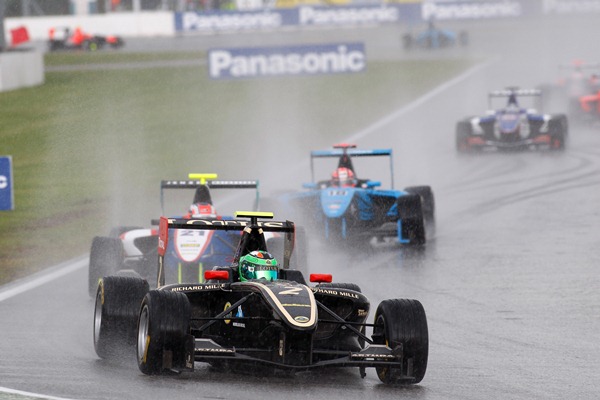 Conor Day was beaten to the win in the first race, but still took two podium finishes (Photo: GP3)

Former F1 driver Antonio Pizzonia returned to single-seaters for his home round at Curitba, and finished up having won both of the races. The Brazilian won the first after a poor start for pole-sitter Adrian Quaife-Hobbs. Still, third place behind main rival Pal Varhaug was going to be enough for the Briton to win the title but a nightmare pitstop saw him finish third. Sergey Sirotkin completed the podium, ahead of Daniel De Jong and Chris van der Drift.

Quaife-Hobbs mastered his start in the second race to jump from third to first, and had a 35 second lead when he headed for the pits to make his mandatory stop three laps from the end. He misjudged his entry though and slid into a tyre wall and into retirement, handing victory to Pizzonia. Van der Drift and De Jong completed the podium ahead of Sirotkin, while Varhaug’s fifth place meant that he can not catch Quaife-Hobbs at the season finale at Sonoma, handing the Brit the title.

Formula Abarth points leader Nicolas Costa took a win and a second place at the season opener at Curitiba, a result matched by 18-year-old Fernando Resende.

Bacheta continues to lead the points by 32.5 points, with Tuscher second. There are six weeks until the penultimate round of the season at the Hungaroring. 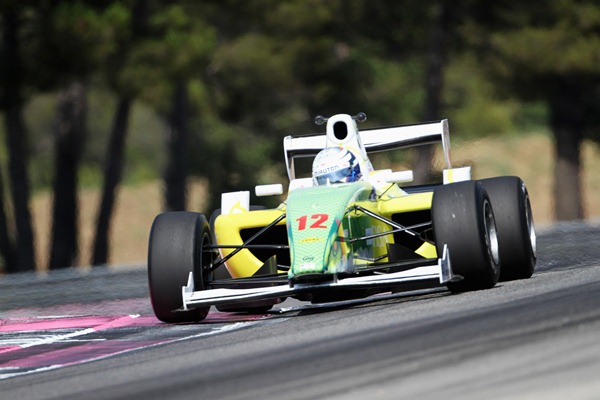 Niccolo Schiro joined Gianmarco Raimondo and Mans Grenhagen in the title battle by winning both races at Paul Ricard. Points leader Raimondo finished both races in second place, while Grenhagen was only 16th in the first race before coming third in race two. Facu Regalia, who chose F3 Open over Auto GP and GP3 at the weekend, was the man who completed the podium in Grenhagen’s absence in race one.

Josh Webster boosted his title chances with a double win at Croft, fresh from his class-winning F3 debut at the Masters of Zandvoort. Scott Malvern maintained his standings lead with a fourth and a second, but it was a bad weekend for the third title contender and single-seater rookie Seb Morris, who retired from the first race and was 11th in the second race.

PaddockScout Driver of the Weekend: Seeing as a certain 31-year-old former F1 driver doesn’t really fall into PaddockScout’s remit, I’ll give the award this week to Matheo Tuscher, who’s just about young enough to be Pizzonia’s son.

Next weekend: GP2 and GP3 again from the Hungaroring, while the best in F3 are in action at the British series round at Spa.