Jack Harvey had been replaced in the lead of the British F3 standings at Spa by Felix Serralles, but rebounded by taking a double pole position at Snetterton. He converted that into a fifth race of the win in the first race, which was red-flagged early in a torrential rainstorm. Serralles finished second ahead of Fortec teammates Alex Lynn and Hannes van Asseldonk. The third man in the title battle, Jazeman Jaafar, spun on the first lap after contact from Carlin teammate Harry Tincknell before recovering to finish seventh behind Fahmi Ilyas and Nick McBride.

Tincknell only finished 12th in that first race but was handed pole for the reverse grid race and used it to take his third reverse grid win of the season. Jaafar came through to second, while McBride took a distant third after spending much of the race behind National Class runners. Harvey was fourth after starting 12th, finishing ahead of Lynn and Serralles.

Race three was another wet affair, which saw Carlos Sainz dominate after starting second. Serralles also got ahead of rival Harvey for second place. Lynn, Jaafar and van Asseldonk completed the top six.

After moving ahead with his race one win, Harvey now leads Serralles by just four points. Jaafar has lost a little more ground, but is still within 20 points of the lead. Two rounds remain at Silverstone and Donington, with the first of those on 8-9 September.

17-year-old Argentine Eric Lichtenstein won all three races at Snetterton. Veteran Finn Antti Buri finished second each time to maintain his comfortable points lead while Lichtenstein moved to within six points of second-placed Jake Cook ahead of the events at Silverstone and Donington.

Riccardo Agostini moved into title contention with a double win at Spielberg in Austria. The Mygale driver won the first race from pole ahead of points leader Eddie Cheever and Ferrari protege Brandon Maisano. The reverse grid second race saw Brazilian Henrique Martins grab his second win of the season, while Maisano came through to second while Kevin Giovesi took a podium on his second weekend in the series this season. Agostini was fourth, while Cheever had his first non-finish of the season after contact with Sergey Sirotkin. Meanwhile, Patric Niederhauser only finished eighth after starting on pole on his return to the series. Agostini was back on top in race three after starting on pole, with Maisano taking second and Cheever third. 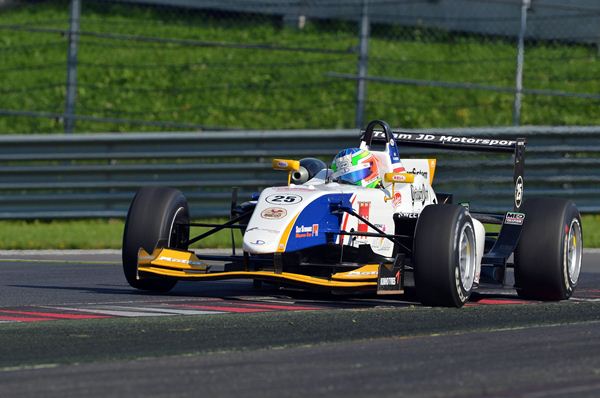 Just five points separate Cheever and Maisano now at the head of the European Series standings, with Agostini only a further 11 behind. Maisano heads the Italian standings by eight points from Agostini and by 15 to Cheever. Three rounds remain at Imola, Vallelunga and Monza, all in September.

Luca Ghiotto won the first race at Spielberg from pole position, and was joined on the podium by points leader Bruno Bonifacio and Santiago Urrutia. Venezuelan female racer Samin Gomez enjoyed a stunning race to come from 11th to fourth and setting the fastest lap, ahead of title contender Nicolas Costa. Urrutia took his second win of the season in the second race after starting fourth, while Bonifacio came through to finish second. Emanuele Zonzini completed the podium from eighth on the grid. Ghiotto was fourth, but Costa only ninth after contact with Gomez. Bonifacio won the third race ahead while Zonzini came out on top of a battle with Urrutia for second. Pole-sitter Ghiotto was fourth, while Costa retired after an early off.

Bonifacio has extended his lead to 24 points over Ghiotto, while Costa is now 35 points off the lead in third and only ten ahead of Urrutia, who is coming on strong towards the end of his rookie season with those three rounds remaining in September.

Jimmy Eriksson extended his championship lead with his third consecutive double victory, this time at Assen in the Netherlands. He won the first race from pole ahead of Rene Binder and nearest rival Kimiya Sato. Mitchell Gilbert claimed his maiden win from the front row of the reverse grid in race two, with polesitter Luca Stolz and series returnee Alon Day completing the podium, ahead of Lucas Auer, Sato and Eriksson. Auer and Sato completed the top three behind Eriksson in race three.

Eriksson now leads by a healthy 72 points over Sato with four weekends remaining, the first of which is this weekend at Spielberg.

Jake Dennis boosted his points lead with a win in the first of the two races at Assen. Nyck de Vries finished second on his return to the series on home soil, ahead of R-Ace teammate Andrea Pizzitola who started from pole. Dennis’ nearest title rivals Jordan King and Josh Hill were eighth and 25th respectively, King having only qualified 14th while Hill picked up damage at the start. 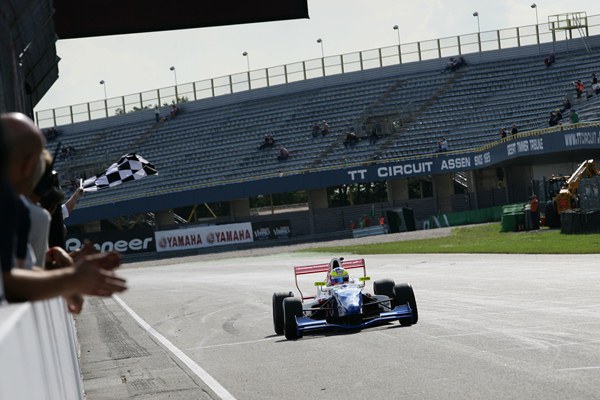 McLaren protege de Vries started the second race from pole position, but a bad start dropped him to eighth. Kevin Kleveros inherited the lead but was later passed by King. Meanwhile de Vries fought his way back through the order, taking the lead on lap 10 to claim his first victory in cars. King finished second, with Dennis third, Kleveros fourth and Hill fifth.

Dennis leads King by 33 points with Hill a further 29 points behind. Four events remain, with Spielberg next up in three weeks’ time.

Caterham development driver Matt Parry scored a triple win at Pembery in Wales, extending his championship lead over Matt Mason with two weekends remaining in September at Rockingham and Croft.

PaddockScout Driver of the Weekend: Nyck de Vries – A fine performance from the karting graduate on home soil to get his first car win.