F1 reserve driver duo boost aspirations with their second wins of the season at the final round of the season, held in Singapore for the first time…

Davide Valsecchi entered the last round of the season at Marina Bay as the clear title favorite, 25 points of closest (and, at that point, only) rival Luiz Razia. And, unsurprisingly, in the end, Valsecchi got to celebrate his long-awaited title as he drove two solid, if unspectacular races, on the way to victory in 2012.

The fight for third place proved much more exciting, however, as the man who occupied it before the round, James Calado, qualified only in 15th and entered the first race suffering from food poisoning. As such, Esteban Gutierrez, Max Chilton, Giedo van der Garde and Fabio Leimer all had realistic chances of snatching that spot from him.

It was, however, series veteran Luca Filippi who snatched pole position away from all of the aforementioned, with Chilton, Gutierrez and Jolyon Palmer lining up behind.

A dreadful start from Filippi allowed Chilton into the lead right away, with Gutierrez snatching second and Palmer running in third, while the Italian found himself all the way down in seventh. The first two remained in their respective positions after the stops and Chilton took his second GP2 win days after being announced as the Marussia reserve driver for the end of 2012. Filippi’s early stop put him in third place but it proved to be a futile tactic as he ran out of tyres and had to pit again. As such, Fabio Leimer inherited third due to Palmer failing to finish the race.

Valsecchi and Razia ran together for the majority of the race and were set for a close finish but their fighting came to an end when Filippi returned to the track after his stop and subsequently put his car into the wall, bringing out the safety car. As such, crossing the line under SC conditions just ahead of Razia, Valsecchi became the 2012 GP2 Series champion. The top ten was completed by Felipe Nasr, Marcus Ericsson, van der Garde, Rio Haryanto and Nathanael Berthon. Calado managed to get into eighth after a clean start and a early pit stop, but had to stop and then retire after a spectacular fight with van der Garde and Nasr as the Brit’s food poisoning caught up with him. 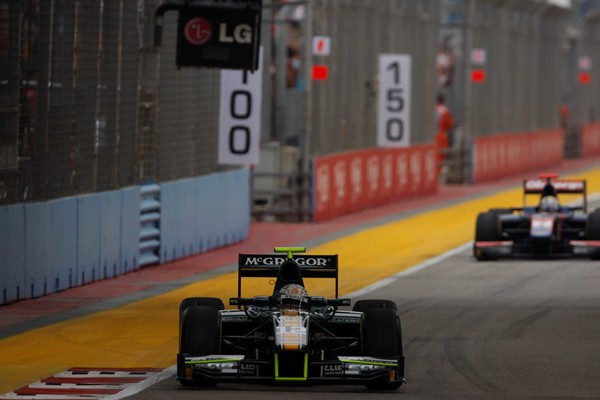 Van der Garde started race two from pole and turned that into a confident victory from start to finish. Ericsson came close behind in second with Leimer getting another podium ahead of Razia and Valsecchi. Gutierrez confirmed his third position in the standings by finishing sixth, while the rest of the points went to Nasr and Stefano Coletti.

Valsecchi and Razia scored an identical amount of points this weekend, which gave the Italian the title. Gutierrez secured third in his second season of GP2 with Chilton in fourth. The best rookie of the season, Calado, went from third to fifth in a weekend which saw him struggle with poisoning while van der Garde finished sixth, level on points with the Brit.

Adrian Quaife-Hobbs entered the last round of the season at Sonoma as the crowned champion but there was still a fight for second place involving Pal Varhaug and Sergey Sirotkin. And, even with the title hunt over, additional interest in the race was sparked by the participation of British IndyCar driver Pippa Mann and the return of Antonio Pizzonia to the series after he won both races the previous weekend.

However, qualifying saw the familiar faces line up on the front row with Quaife-Hobbs claiming his seventh pole for the feature race (out of the possible eight). Sirotkin lined up alongside him, with Pizzonia and Varhaug right behind.

Yet most of the qualifying results didn’t end up amounting to much as lap one saw complete mayhem unfold. Quaife-Hobbs held the lead in turn one but was then taken out by Pizzonia which ended the race for both of them. Sirotkin lost positions trying to avoid the wreck and that gave the lead to Varhaug as Max Snegirev and Francesco Dracone also crashed out on lap one. The carnage brought out the safety car and, after that was over, the race settled down. Varhaug ended up taking a win ahead of Daniel de Jong and Sirotkin. Italian F3 champion Sergio Campana was fourth ahead of Giacomo Ricci and Giancarlo Serenelli. Kotaro Sakurai, who contested three rounds of GP3 earlier in 2012, was seventh ahead of Antonio Spavone, who got the reverse grid pole. Mann was ninth, a full minute behind Varhaug, but still ahead of the last finisher, Michele La Rosa. Still, all of them should be reasonably happy with that, as the ten people who finished the race ended up with some points to their names. 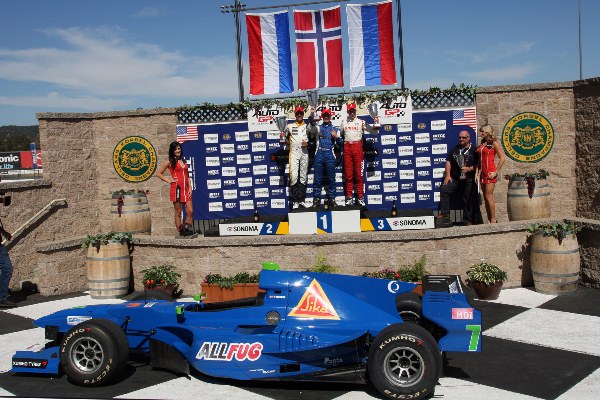 Varhaug got his car into 'victory lane' (Photo: Auto GP)

Spavone started race two in reverse grid pole with Sakurai alongside him on the front row, yet it was a very short race for the Japanese driver as his car broke down immediately as the race went green, leaving him stalled on the grid. After early on-track action and a safety car period, the race turned into a game of pit stops from which Sirotkin emerged as the leader, ahead of Quaife-Hobbs (who was mounting a fantastic recovery challenge) and Spavone. From there, Sirotkin led the race confidently and took his second race win of the season. Champion Quaife-Hobbs finished in second, seemingly content with simply driving it to a podium finish. However, the race was far from processional from there as there were fights all over the pack, particularly for third, where Campana overtook Spavone with a few laps to go to secure the final podium position. Spavone held off Varhaug for fifth and, just as the previous race, only ten people got to the finish line. The top ten was completed by de Jong, Snegirev, Mann, Dracone and La Rosa, who wrecked his car immediately after crossing the finish line.

Varhaug’s feature race win allowed him to become series vice-champion behind Quaife-Hobbs and ahead of Sirotkin. Chris van der Drift wasn’t racing at Sonoma but still finished the championship in fourth, ahead of de Jong and Campana.

Series leader Jake Dennis went into the penultimate weekend of 2012 at Zandvoort with realistic chances of sealing the title but ultimately came six points short of the goal. In race one, Dennis completed the podium as Josh Hill won his fourth race of the season ahead of Jeroen Slaghekke. Meindert van Buuren, Jr. was fourth and Jordan King rounded up the top five.

Race two saw a huge number of retirements with 8 cars out of 23 not being classified, Hill and Slaghekke among them. The race was won by Steijn Schothorst ahead of Shahaan Engineer and, yet again, Dennis. Van Buuren secured another fourth ahead of Kevin Kleveros. Meanwhile, King had a fairly terrible race, finishing two laps down in 15th.

However, King turned it all around by claiming his first victory of the season in the third race. The race didn’t run to full time and was red-flagged after an incident on lap 8 but full points were still awarded. Engineer, as such, was second again and van Buuren completed an excellent weekend in third. Slaghekke was fourth ahead of Dennis and Hill.

The final round of the season will take place at Spa-Francorchamps on 12-14 October. With 60 points being the maximum in the two remaining races, Dennis has one hand on the title, leading King by 55 points. 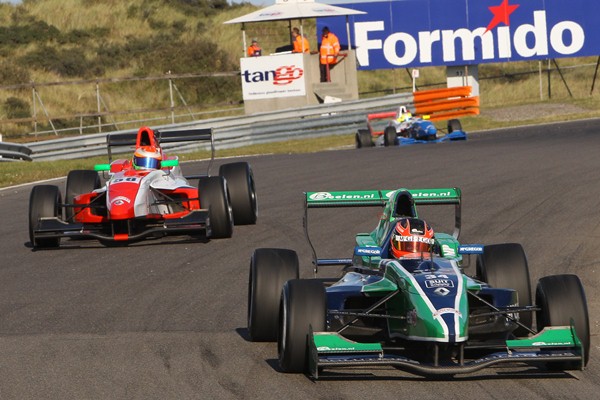 Schothorst leads Engineer and Dennis on his way to NEC win no. 2 (Photo: Chris Schotanus)

PaddockScout Driver of the Weekend: Fabio Leimer – the Swiss driver ended the 2012 season on a high note, securing third in both races with some great overtaking work in race two in particular. His great performance this weekend didn’t move him up the order in the standings, but it’s hard to think of many better ways to get noticed by F1 teams.

Next weekend: It’s a busy one. The penultimate World Series by Renault and Formula 3 Euro Series rounds take place at Paul Ricard and Valencia respectively, while the Formula 2 and British F3 titles will be settled at Monza and Donington respectively.