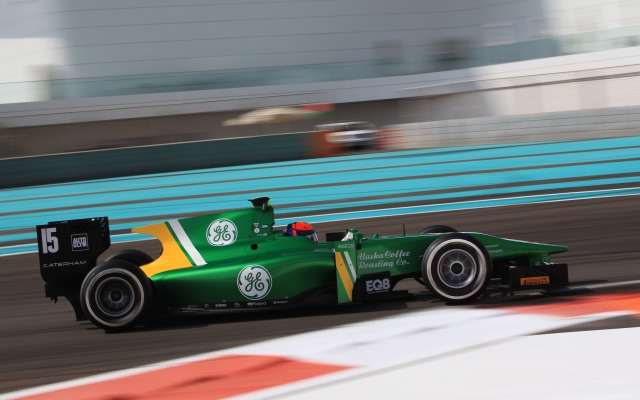 Alexander Rossi will return for a second year of GP2 with Caterham this season, and is joined in the team by Rio Haryanto.

Rossi finished 2013 with a maiden series victory in the Abu Dhabi feature race, and ended up ninth in the final standings.

The American driver joined Caterham in 2011 while he was competing in Formula Renault 3.5, finishing third. He competed for the new Arden Caterham team the following season, and then joined GP2 from the second round of 2013. He claimed a podium on his debut in Bahrain and added further top threes at Spa and Monza before his breakthrough pole and win at Yas Marina.

“I am pleased to be back with Caterham Racing for 2014 fighting for the GP2 championship”, said 22-year-old Rossi. “My 2013 program had some changes which meant I missed the pre-season tests and a couple of the early GP2 races, however, throughout the season the team and I made some big progress and by Abu Dhabi we were definitely one of the cars to beat. This continued in the post-season tests and I’m quite confident about the pace in 2014.”

In addition to his GP2 programme, Rossi will continue hold a reserve driver role with Caterham F1 alongside Dutchman Robin Frijns.

“As returning Caterham F1 Team Reserve Driver my duties will continue with F1 outings, my role as?simulator driver and on track reserve for non-GP2 weekends.?This is the perfect development for a future F1 race drive as I play an important role in assisting the team develop its 2014 car, something that will be particularly important with the 2014 technical changes.”

Indonesian racer Haryanto joined the team for the test in Abu Dhabi at the end of 2013, setting the pace on the second day and going on to set the third best time of the whole test in the final session.

2014 will be the Haryanto’s third year in GP2. He was 14th with Carlin in 2012 before moving to Addax, where he scored a maiden podium at Silverstone but finished down in 19th in the standings. He previously won three races in two years in GP3 with Marussia Manor.

“It is a great feeling to sign with Caterham Racing for my 2014 GP2 campaign,” stated Haryanto, who turns 21 on Wednesday. “After such a successful post-season test with the team in Abu Dhabi and the possible Formula 1 opportunities, this was the obvious choice for me. The team atmosphere immediately filled me with confidence and I am sure that this new chapter, with a new team is going to bring success.

“I am also looking forward teaming up with Alexander Rossi. We are both strong championship contenders and with our GP2 experience, we will work together to fight for both the team and driver championships. My ultimate goal is to finish the season as high as possible in the 2014 GP2 championship and give myself the best possible chance of a full time Formula 1 seat in 2015.” 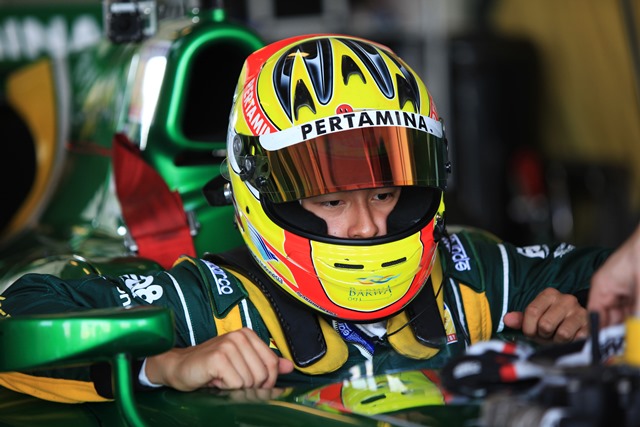 “I am delighted to announce that Alexander will continue with us into 2014, and that Rio is joining our team,” said Sharizman. “This announcement also means that we can focus on our 2014 preparations much earlier than we have been able to in previous years. Our team has undergone a number of changes since the end of the 2013 season which we believe gives us the capability to have our best season to date, and to build on our previous championship results.

“Our plan for Alexander in 2014 is part of a two year GP2 programme. After finishing 2013 as top rookie it is now time for him to mount a challenge for the championship, and with the experience he has gained and the increased support he will have in 2014, I believe that the championship is a realistic target.

“Having Rio joining the Caterham family is the result of a lot of hard work over the last two years, in which time we have seen Rio develop into one of the most promising Asian racing drivers in the world. His experience in GP2 will help the team develop further and having two strong, consistent and quick race drivers will help us achieve our goals. Rio is a determined young man and he returns to GP2 with the aim of being a strong Championship contender alongside his teammate.”

To judge Rossi solely by his results in the past two seasons racing in Caterham colours would be to underestimate the impact he’s had on his teams. The American has played a key role in improving the competitiveness of the packages underneath him.

The Arden Caterham team was all at sea when it arrived in Formula Renault 3.5 at the start of 2012, after reliability woes robbed it of much pre-season running. While Lewis Williamson struggled, Rossi dragged the car onto the podium at Monaco. His own results didn’t get any better than that as the year went on, and it was Antonio Felix da Costa who shone when he jumped into the sister car, winning four of the last five races. But Rossi played a key role in making the team competitive and actually claimed the fastest lap in each of the races that his team-mate won, even if he failed to get good results himself for various reasons.

The Caterham GP2 team has never been the most consistent force. Davide Valsecchi got some early good results in 2011 but vanished in the second part of the campaign, and the experienced Giedo van der Garde wasn’t the constant frontrunning threat he would have been with one of the more established squads, even if he did bag a couple of wins.

Rossi hopped in the car in Bahrain last year and immediately put it on the podium. His next few rounds were hampered by struggles to get out of the midfield in qualifying, even though he could race strong. At Spa he got the car into the top five in qualifying and duly returned to the podium and raced his way to another at Monza. After another strong showing in Singapore, he won from pole in Abu Dhabi, finishing the year as one of the form men. Not a bad achievement given he’s racing against good drivers with multiple years of GP2 under their belt.

It’s welcome news that he gets to return for another year in 2014, and credit to Caterham for their continued faith in his abilities. If he continues where he left off at the end of last year, there’s no reason why he can’t add more race wins and maybe even fight for the title. Doing so would make a strong case for that final promotion to F1.