Jake Rosenzweig has been given a full-time drive in the GP2 Series this year by the Addax team.

The American driver raced for the team at the Monza and Singapore rounds at the end of the 2012 season, replacing Josef Kral after the Czech driver?s victory at Spa. He then took part in both post-season tests at Barcelona and Jerez for the Spanish squad.

The 23-year-old contested his third season of the Formula Renault 3.5 Series in 2012, finishing 21st in the standings with one points finish as teammate to title contender to Sam Bird at the ISR team. He was 19th and 15th respectively in his two previous campaigns.

?I am excited to be joining Addax for the 2013 GP2 season and wish to thank all involved for making this possible,? he said.

?Having raced in the final two rounds of the 2012 championship with Addax, I know what an opportunity this represents to be working with them again. The race calendar has some great circuits and I am looking forward to hitting the ground running. I will do my best to score as many points as possible over the course of the season.?

Addax owner and team principal Alejandro Agag added: ?I?d like to welcome Jake Rosenzweig although he is almost part of the family after having competed in four races and done four complete tests with us.

?We are keen to count on his services because he has shown that he is willing to work very hard to improve in each and every race and training session. The whole team and everybody involved is delighted with his professional attitude. I?m sure that together we can form a good tandem of team-driver competitive enough to get closer to the leading drivers of every race.?

Rosenzweig’s signing with Addax had been on the cards since the back end of last season, but there was always the hope that the team would take a more accomplished driver in an attempt to reverse its fortunes. Sadly with today’s announcement, that has not proved to be the case. 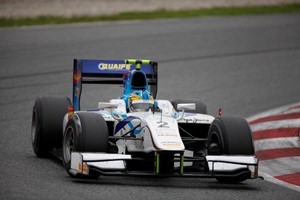 If it was concerned with results on the track, Addax could have taken on Adrian Quaife-Hobbs (Photo: Alastair Staley/GP2 Series Media Service)

Alejandro Agag’s team has always taken more money for drives than its rivals – that much is evident by the fact they ran Vitaly Petrov, Sergio Perez, Giedo van der Garde and Charles Pic between 2009 and 2011 – all drivers who have since been able to flash the cash at the Formula 1 teams to get a break at the highest level. Fortunately for Addax, not only were they rich but they were quite quick too. As such they were able to finish second in the teams’ championship in 2009 and 2010 before taking the title with Pic and van der Garde in 2011.

However, as GP2 budgets have risen with more races, in more distant locations, Addax have clearly continued to charge more than the rest. And in the current economic situation, the drivers and their representatives are having none of it. Why else did they have to take Johnny Cecotto to drive their #1 car last year when the Venezuelan had scored points in just one race in his two prior seasons?

Admittedly, Cecotto did at least show enough speed on occasions to score two wins, but so poor was his consistency that he only finished the year ninth in the standings, with points from just seven of the 24 races. With seven teams represented by the eight drivers ahead of him, that translated into an eighth place finish in the teams’ championship for Addax. Cecotto’s teammate Kral struggled even more, dropped for the Bahrain double-header in favour of Dani Clos. The team retained Kral, only dropping him after he’d won in Spa, in favour of Rosenzweig. This seemed to clearly be a financial decision, not a performance one.

Agag was well aware of the issue as soon as the season had started, extraordinarily stating in the team’s post-Malaysia press release that he wished he had signed Davide Valsecchi. Plummeting from first to eighth in the pecking order, the team’s 2012 lineup was clearly not good enough.

Have they learnt their lession? No.

Rosenzweig has no place at a team that considers itself title contenders. His FR3.5 record leaves much to be desired. It’s telling that Addax’s statement makes no mention whatsoever of his results, purely rattling off the championships he has competed in. Agag doesn’t try to say he’s picked Rosenzweig for his driving ability, purely that “he is willing to work very hard to improve” and is “delighted with his professional attitude.” The likely truth is that he’s giving them a nice little profit, so all that matters is that he’s putting some effort in. Ability doesn’t come into it.

Don’t get me wrong. Teams need to cover their costs, and in GP2 those are extortionate. Rosenzweig isn’t the worst driver in GP2 history, far from it. But those can be explained by some teams needing to take on high-paying drivers simply to stay afloat.

From the outside at least, it seems impossible for Addax to be in that situation. In terms of owners and sponsors (the most notable of which are Qatari investment firm Barwa and Spanish banking giant Santander), Addax surely has the wealthiest. It should hardly need drivers to bring a budget at all.

But it’s not here to be successful on track, or help bring on young talent. It’s here to make money. And in GP2 – a supposed breeding ground for future F1 champions – that just seems wrong. And with costs the way they are, a flawed idea, too.