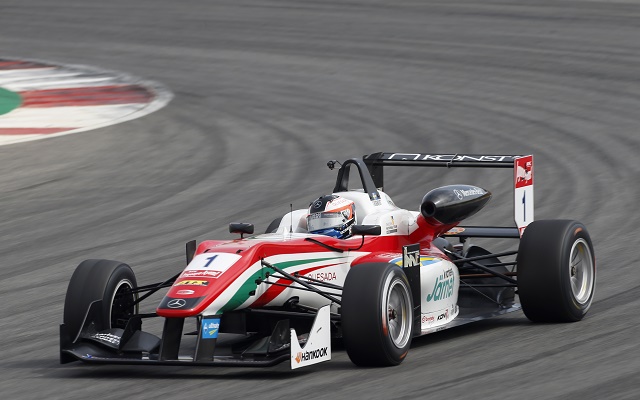 Felix Rosenqvist has moved back to the FIA European F3 Championship lead after a superb victory from pole position in race two at Portimao.

The Swede his eighth win of the season, leading his Prema Powerteam teammates Jake Dennis and Lance Stroll to a sweep of the podium places for the Italian team.

Rosenqvist’s lead had been negated during the race?due to two separate safety car periods. The first one started on lap two due to?debris from?Matthew Rao‘s stranded Fortec, while the second one kicked off on lap 12, when?Nick Cassidy?went off at T1 from fourth place.

Ultimately, Rosenqvist wound up finishing ahead of Dennis, having led by as much as 5.3 seconds before the second safety car.

Finishing fourth was?Gustavo Menezes, who did well to hold off a hard-charging pack led by?George Russell in the closing laps of the race. Pietro Fittipaldi recorded a season-best sixth place for Fortec Motorsport.

Alexander Albon, who was excluded from qualifying for this and the final race of the meeting, drove an exceptional race to finish just outside the points in 12th.