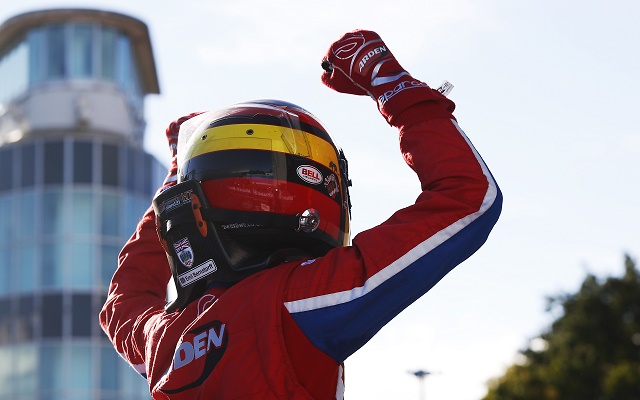 Briton Emil Bernstorff charged from fifth on the grid to take a hard-fought victory in the feature race at Monza in the sixth round of the 2015 GP3 series season.

There was drama at the start with Luca Ghiotto, the runaway pacesetter in qualifying, stalling on the grid. The championship leader was forced to call it a day shortly afterwards.

Esteban Ocon inherited the lead, but quickly came under pressure from Matt Parry.

Bernstorff, meanwhile, was the man to watch right from the start, battling with former German F3 teammate Marvin Kirchhofer for fourth. The pair exchanged positions several times over the next few laps.

The Arden driver eventually managed to move past Kirchhofer on lap eight around the outside of the first chicane in what was his fourth attempt. He soon began chasing the cars in front and, within the next four laps, he had caught up to Arden teammate Kevin Ceccon and overtook him at the Della Roggia chicane.

It wasn’t long before Bernstorff joined the battle for the lead. He eased into second after passing Parry at the first chicane, and then diced with Ocon for several laps before going round the outside of the Frenchman to take the lead on the penultimate lap.

Despite that, Ocon’s sixth consecutive runner-up finish helped him close in on Ghiotto in the standings, while Ceccon managed to make his way past Parry at the second chicane on the last lap to finish on the podium in his home race.

Kirchhofer was a distant fifth ahead of Jimmy Eriksson, who won the first Monza race from pole last year.

Seb Morris ran seventh for much of the race, but he lost out to Matheo Tuscher at the first chicane and then ran into the back of the Swiss driver at the second chicane, losing a part of his front wing and subsequently being passed by Alex Palou.

While Tuscher and Palou took seventh and eighth, Morris would subsequently lose out to his teammate Alex Fontana, the two Status cars rounding off the top ten.

UPDATE: Welshmen Parry and Morris were disqualified from the race as their cars were found to be underweight.