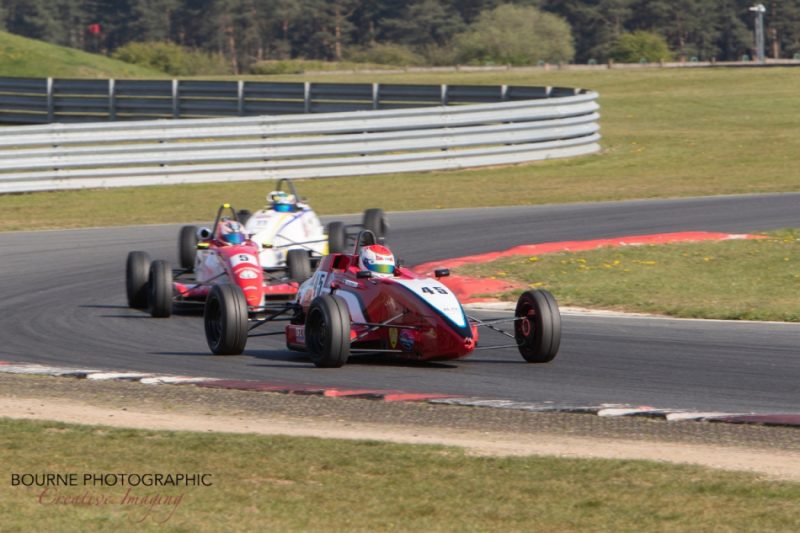 Rory Smith stormed through the field from seventh on the grid to take the first win of the 2019 BRSCC National Formula Ford 1600 season at Snetterton.

Kohlbecker continued to hold off his team-mates for second but Smith was carving his way through and up to fourth by the end of lap two.

Martin?s defence of first came to an end as Smith, having demoted both CDRs on the same lap, forced his way past into turn one, which also allowed Kohlbecker through into second in the process.

The top five had begun to break away from the rest of the field but with two laps remaining, the leaders began to close up once again with Smith having to defend his lead hard in the closing stages.

Clarke was forced wide at the exit of Murray?s approaching the penultimate lap, which initially dropped him to ninth, before he retired with one lap remaining.

The incident allowed the top two a head-to-head fight on the final lap, with Smith holding on to the win just ahead of series newcomer Kohlbecker.

Reigning double Formula 1 Esports champion Brendon Leigh dropped from his starting position of fifth down to seventh off the start, while his Kevin Mills Racing team-mate Neil Maclennan initially moved into the lead battle.

But when Maclennan was edged out wide at the Bombhole at the end of the opening lap, it swiftly dropped him back down the order. Conversely, Leigh was able to climb back up to fifth place, which became fourth after Clarke’s off.

Leigh would be demoted to 10th after the chequered flag, however, after contact with Browne at the Wilson hairpin sent the CDR driver wide and down to 10th place. That became ninth after Leigh was handed his 15.5s penalty.

John Svensson had initially in the top 10 fight with Marzorati after a fantastic start from 13th, vaulting him up to ninth and highest-placed Clubman series driver.

His earlier hard work was undone around the half-way mark, however, as he fell back down the field and ended back in 13th.

Samuel Street had bounced back from electrical issues that had prevented him from running during qualifying, finishing 15th.?Scott Huntley started from pitlane with a 10s penalty, his car having been found underweight after qualifying.