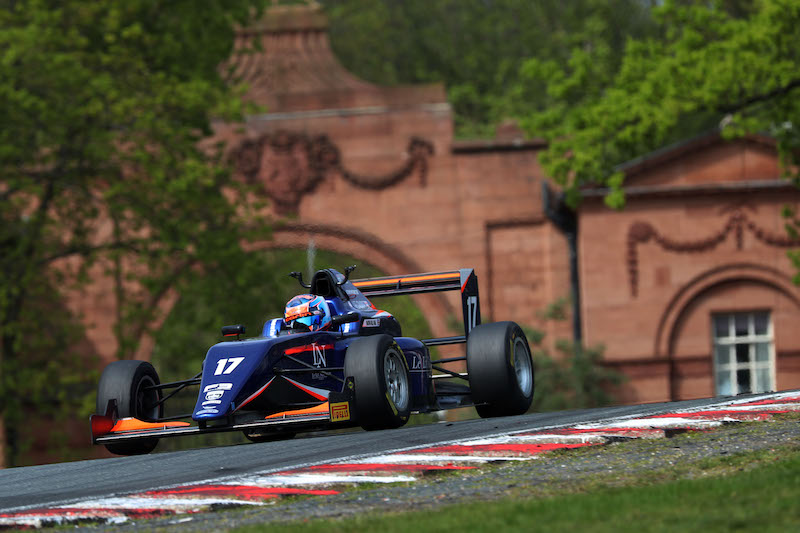 Carlin’s Clement Novalak won the first BRDC British Formula 3 race of the 2019 season at Oulton Park by 1.6 seconds over Ayrton Simmons to kick-start his championship campaign.

Novalak was able to take the lead from team-mate and race one pole-sitter Kaylen Frederick, although it wasn’t long until the safety car came out due to an incident further down the field.

At the restart Novalak kept hold of his lead while Frederick fell down the order after he had to make an unscheduled pit stop which left him a lap down by the end of the race.

Race three pole-sitter and Chris Dittmann Racing driver Ayrton Simmons moved up to second place, although he wasn’t able to make a sustained challenge on his British compatriot before the end of the 20-minute race.

The win in Novalak’s first in the series, having dropped back from pole position in the same last year at the beginning of his partial rookie campaign.

Johnathan Hoggard completed the podium for Fortec Motorsports on his F3 debut, 4.6s off Novalak in front.

Behind him came Douglas Motorsport’s Ulysse de Pauw to finish fourth, with Sasakorn Chaimongkol for Hillspeed?less than one second behind him at the chequered flag in fifth place.

After dropping three places at the start of the race, Kiern Jewiss was able to recover back to sixth place by the end of the race, passing Double R Racing’s Hampus Ericsson – who finished seventh – on the penultimate lap.

Simmons’ team-mate at Chris Dittmann Racing, Nazim Azman, came home in eighth position, while Manuel Maldonado – who had to pit for a new front wing at the end of lap two – and Joshua Mason rounded off the top 10.

Frederick will start race two from pole position on the fully reversed grid alongside fellow American Neil Verhagen, who finished 50 seconds adrift of the pack after losing his front wing.