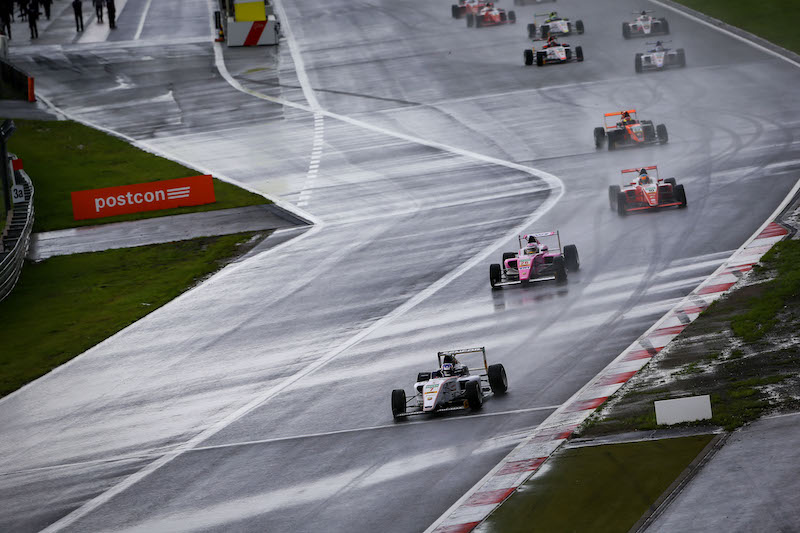 Earlier heavy rain caused the race to be delayed and started behind the safety car, which remained out for three laps before the pack was released.

Stanek led the field from reversed-grid pole, while Dennis Hauger immediately moved up from fourth to second, benefitting when Joshua Durksen ran wide at Turn 5.

Having continued to pursue Hauger, Durksen would run even wider at the same point six laps later and crash into the tyre barriers, bringing the safety car back out.

The race resumed with around five minutes left on the clock, but the safety car was immediately called upon again after a tangle between Gianluca Petecof and Gregoire Saucy over sixth that took out the hapless Lucas Alecco Roy and left Petecof in the barriers at Turn 4.

The race ended under the safety car, giving Stanek the win ahead of Hauger and Oliver Rasmussen.

Alessandro Ghiretti was fourth ahead of US Racing team-mate Arthur Leclerc, as the Sauber junior squad’s championship leader Theo Pourchaire came close to losing his 100 per cent scoring record this season.

Pourchaire was close behind Leclerc when he ran into the gravel on the outside of the final corner on lap seven, dropping him to 15th.

He recovered to 11th as the race was neutralised for the final time, and thus scored one point, as seventh-place finisher Hadrien David is a guest driver ineligible for points.

That means Pourchaire’s lead is now 53 points over Leclerc. Stanek has climbed from eighth to third over the weekend, with Ghiretti making it an all-US Racing top-four, one point ahead of Van Amersfoort’s Hauger.