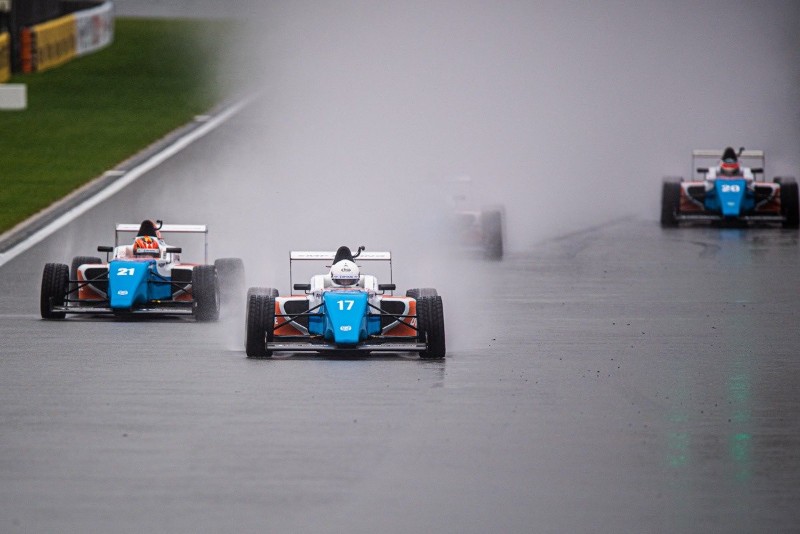 Pavel Bulantsev was denied a double Formula 4 SMP win at Moscow Raceway by a last lap move, but looks certain to win the title next month.

After being announced as the first F4 entrant to the FIA Motorsport Games, Bulantsev took pole at former Formula Renault 3.5 venue Moscow by 0.684 seconds from title rival Artem Lobanenko, in a qualifying session rife with track limits penalties.

Pole was translated into a dominant 11.573s win in race one, where Lobanenko failed to make the finish and it was Alexey Nesov, the only other remaining title contender, and Nikita Alexandrov who completed the podium.

Lobanenko got to start from the front row again in race two, and this time hassled Bulantsev throughout in sodden conditions. His moment of opportunity came on the final lap, passing Bulantsev for the lead and immediately pulling away to take fastest lap and the race win.

By finishing further back in third, Nesov remains Bulantsev’s closest challenger in the standings, while a closely taken fourth place for Alexandrov over Alexander Vilaev closes the gap between them for fourth in the standings.

For the second time in a row, Conrad Clark took a triple win in Chinese F4 but was once again beaten to pole in the championship’s first visit to?Qinhuangdao.

Smart Life Racing Team’s Zijian He took his second pole of the season in qualifying, heading BlackArts Racing driver Clark by 0.321s. Only three other drivers competed in the session on the steel factory-located circuit.

He threw away his pole advantage almost immediately in race one, locking up into Turn 1 and falling down the order. Clark claimed the lead, ahead of He’s team-mate Jingwei Lu. On lap four of 15, He passed FFA Racing’s?Tiezhen Liu and Jing Zefeng to climb from fifth to third, then claimed second from Lu a lap later.

Clark’s lead was already over 15s by this point, and the New Zealander cruised thereon to the chequered flag. Lu had no match to even He’s pace, but still finished ahead of scrapping FFA pair Liu and Zefeng.

It was another dominant win for Clark ahead of Ye in race two, which was delayed by a warm-up lap crash, while X-Racing Team’s Shang Zongyi charged through from seventh on the grid to take third.

In the reversed-grid final race, Clark took less than a lap to move up to second and had victory all but sewn up by the end of the next one. He and Zongyi also progressed from the back to finish second and third again.