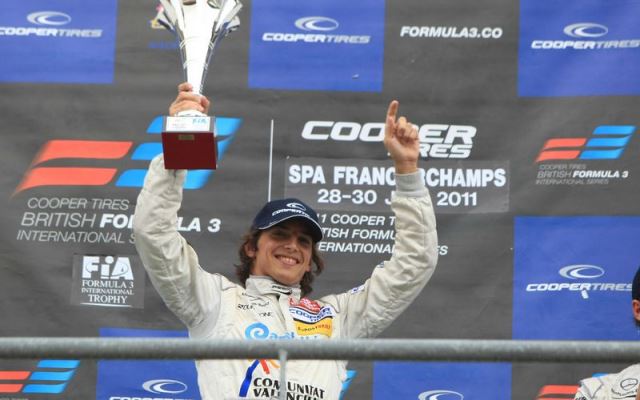 Formula Renault 3.5 form man Roberto Merhi will return to Formula 3 this weekend when he competes in the British series round at Spa-Francorchamps.

The Spaniard currently sits second in the FR3.5 standings after wins at Moscow and the Nurburgring, after two years competing in the DTM with Mercedes.

His F3 return with come with Double R Racing and make him eligible to race in the Macau Grand Prix in November, which he previously contested on four occasions between 2008 and 2011. When he won the F3 Euro Series title with Prema in 2011, his hopes of winning Macau ended with a start-line shunt.

Merhi will drive a third Dallara F312-Mercedes for the team this weekend, alongside squad regulars Camren Kaminsky and Andy Chang. He previously won two races at the Spa British F3 round in 2011 (pictured).

?I?ve known Roberto for a while now, we?ve tried to get him to do Macau with us for some time but it never quite happened,? said Double R team boss Anthony ?Boyo? Hieatt.

?We spoke about Macau for this year and he said he?d love to do it, so racing at Spa this weekend in British F3 will qualify him for it ? I?m absolutely delighted to have Roberto as part of the team this weekend and, of course, hopefully for Macau later in the year.

?His World Series campaign is going good but there?s a two month break in that now, he wants to stay sharp in the meantime and so Spa is a good fit all round. He loves Spa, loves F3 and he?s a Mercedes driver so it ticks all the boxes. He?s going to set a good base line for Camren and Andy which is fantastic for them. We really are thrilled to be working with Roberto.?

Merhi is one of several additions to the British F3 grid, which is set to grow from five to 14 for the trip to Belgium. Autosport reports that Carlin will run European Championship pair Ed Jones and Sean Gelael in their usual cars but will not register them for points. Jones will be making his return after injuring his back at Pau in May. Carlin have also recruited Sam MacLeod to join regular Peter Li. MacLeod is just seven points off the series lead after winning four of the six races he entered with Fortec, who will just run Matt Rao and Martin Cao at Spa.