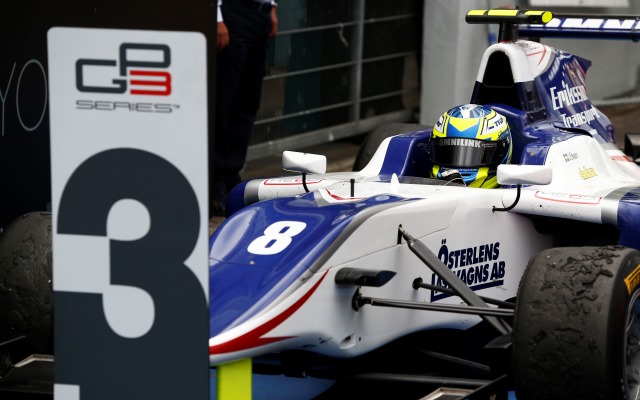 Jimmy Eriksson has lost ground in the GP3 title race after being demoted from his podium finish in race two at Hockenheim.

The Swede had finished in third place after keeping championship leader Alex Lynn at bay. That had meant Lynn had only extended his lead from eight to 18 points over the German round despite Eriksson starting the weekend with a five-place grid penalty for causing a collision last time out at Silverstone.

However, stewards gave Eriksson a post-race time penalty of 20 seconds for ignoring yellow flags, relegating him to 15th in the race results.

With Eriksson therefore losing ten points and Lynn gaining two by inheriting the final podium place, the gap between the two now stands at 30 points.

Another title contender in trouble with the stewards was race one winner Marvin Kirchhofer. The German, who sits third in the standings, 34 points behind Lynn, has been slapped with a five-place grid penalty for next Saturday’s opening race in Hungary for the contact he made with Emil Bernstorff at the hairpin which caused both to retire.

Similarly, Pal Varhaug was given a five-place grid drop for hitting Sebastian Balthasar at the hairpin on lap one.