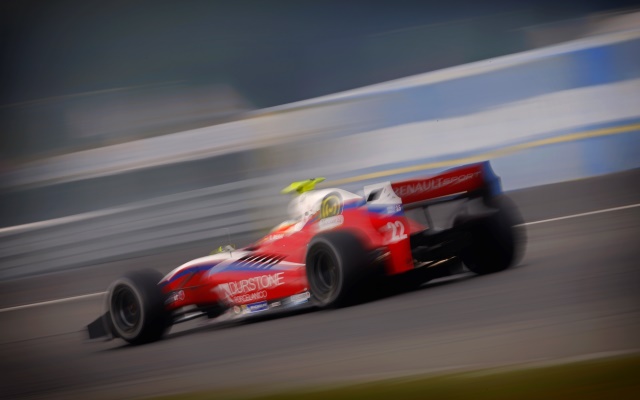 Roberto Merhi transferred his strong recent form into wet conditions to claim pole position for the second Formula Renault 3.5 race at the Nurburgring.

Merhi, who won race two in Moscow and finished second in Saturday’s first Nurburgring contest, was at the front throughout the session, claiming top spot with his first flying lap, and was on top again after the first runs as drivers returned to the pits.

Despite most of the field finding improvements with their final laps, Merhi’s penultimate effort was enough to keep him ahead of the field, before finding extra time with his last lap to finish up 0.372 seconds clear.

In only his third weekend in the series, Oscar Tunjo was at the sharp end throughout the session and got up to second place with his last lap as the Colombian prevented an all-Spanish front row. Championship leader and race one winner Carlos Sainz had duelled with Merhi for much of the session but despite improving with his final lap, he had to settle for third.

Oliver Rowland got up to fourth with his last lap, while row three will be filled by the two Lotus drivers Matthieu Vaxiviere and Marlon Stockinger. Like Tunjo, Vaxiviere was a constant threat, holding fourth at the break and then going 0.7 seconds clear of the rest with two minutes left before ending up fifth.

Sergey Sirotkin briefly upstaged his fellow Saturday podium finishers Merhi and Sainz to take P1 ahead of them with five minutes left, but the Russian failed to improve his time on his final lap when conditions seemed to be best, meaning he finished up down in seventh. Zoel Amberg, Pietro Fantin and Will Stevens completed the top ten, while Pierre Gasly managed to out-do his poor qualifying from Saturday by ending up 21st of the 22 runners.