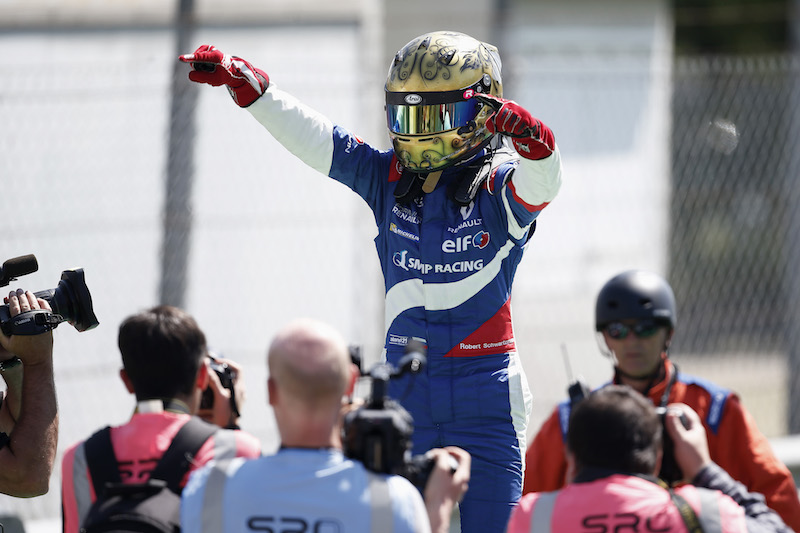 Formula Scout has managed to get Robert Shwartzman to take a seat at the back of the R-ace GP awning at Silverstone for a hastily-arranged chat, but the Russian is not exactly sitting still.

It?s been about half an hour since he stepped off the podium, but he?s still visibly buzzing. Perhaps that?s not surprising, having claimed his second win from as many events in what?s considered to be an ultra-competitive Formula Renault Eurocup. And it?s because of that strong form that we were keen to sit him down for a few minutes?

The seventeen-year-old is rightly pleased with how his campaign has begun, although he?s quick to note his coming together with Gabriel Aubry in race two at Monza, without which it could well be him and not his team-mate Will Palmer on top of the standings.

?Yes, it?s a really good start,? he says. ?Unfortunately, the second race in Monza went a bit unlucky with the crash because it was [set to be] another podium for me, but I?m always top three and it?s really good.?

He?s just kept Palmer at bay to win the second race at Silverstone, after the Briton had claimed a home victory on Saturday.

Before fending off his team-mate after a safety car restart, he had to battle his way back past a fast-starting Dan Ticktum, doing so brilliantly by getting alongside the Red Bull Junior around the outside of Vale. Ticktum then ran out wide at Club, but had no complaints, admitting Shwartzman?s move was ?good? and ?fair?. 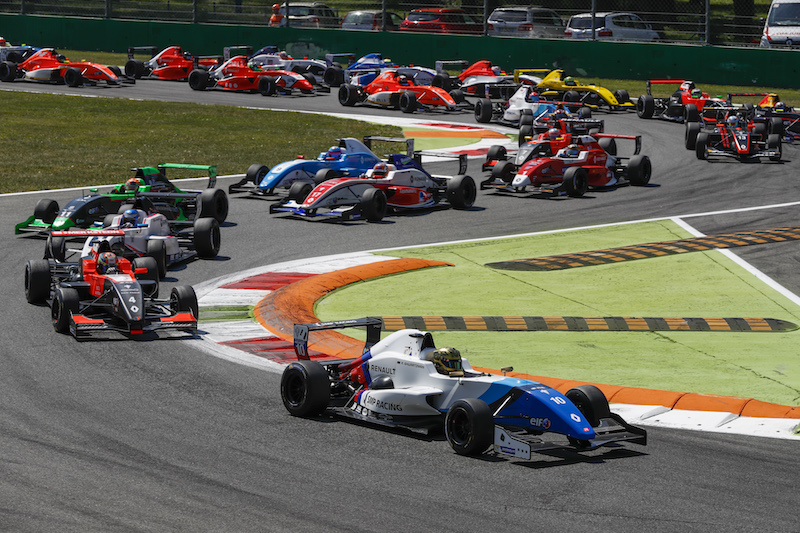 Shwartzman converted pole into victory in race one at Monza…

?It was tough because I did a pretty shit start and a pretty shit restart after the safety car but I managed to keep my first place and it was really nice,? Shwartzman says.

His poor initial getaway had undone a sublime qualifying effort to beat Ticktum to pole on slicks on a drying track. Ticktum had snatched top spot with his final lap of the session, only for Shwartzman to respond with a lap that was 0.922 seconds faster than anybody else.

Any young driver trying to make it will be keen to big-up their good days, but Shwartzman is combing that with plenty of praise for his team. Which is no wonder, given R-ace GP has made an unbeaten start to the season.

Alongside Palmer and Max Defourny, Shwartzman is the newcomer to the French squad among its leading three contenders, but is evidently settling in well. 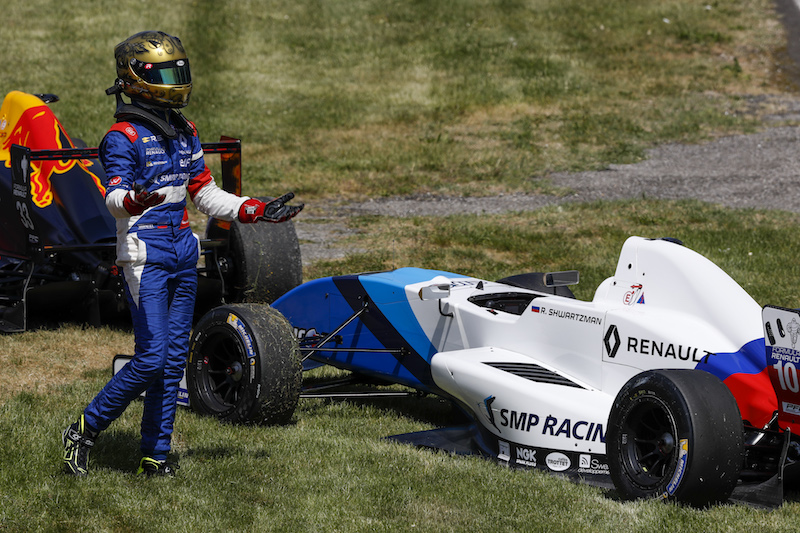 …but race two collision was costly for points

?It?s a really good team,? he says. ?When I at their base before we had started racing, I was not really confident because it was different people, and I didn?t feel quite in the right place, but after the first race I really understood that this team is really working for the win, working every night just to win, and they prepare a really good car. So I?m really lucky with the team to be fair, really happy and it was really the right choice to go here.?

R-ace GP was not the first choice, though. Shwartzman spent last season, his first in Formula Renault, with the rival Josef Kaufmann Racing squad, beating champion Lando Norris (for whom he was a major rival in junior karting) to a couple of Northen European Cup wins late in the season.

Come December, he was testing with the Koiranen GP3 team with a view to making the step up.

?Then my sponsor decided it was maybe too early and so we needed to go with Formula Renault again,? he explains.

?When I called Kaufmann, it was already full. So we needed a really good competitive team and we found R-ace. I think it was really the right choice.? 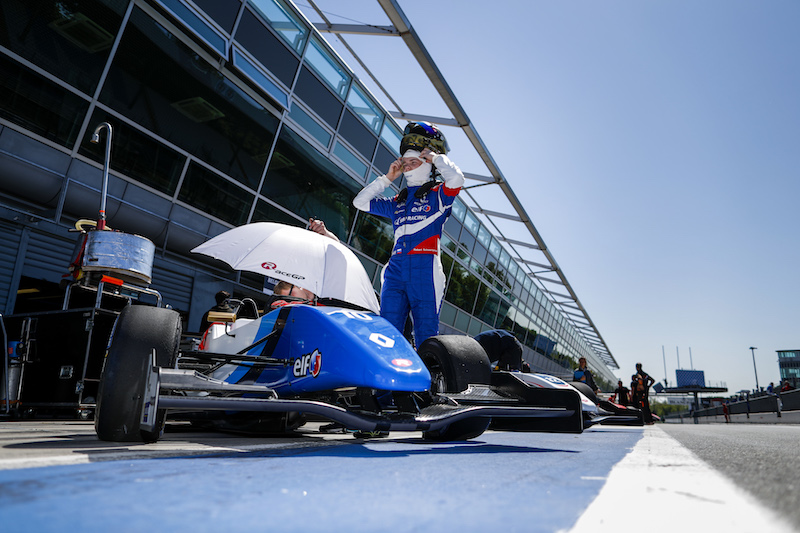 Shwartzman?s primary backer is SMP Racing, the Russian group prevalent in everything from its own Formula 4 series to Sergey Sirotkin?s Renault Formula 1 outings. In an extensive list of drivers it supports, Shwartzman is increasingly standing out.

?I think they?re supporting me a lot and I think the more I win the more they look at me and they realise that maybe they can push me into Formula 1,? he says. ?Every year the support from them is more and more. It?s thanks to them that I?m here and I?m driving this car with this good team.?

As yet though, SMP is yet to push a driver as far as an F1 race seat. Instead, sportscars is a keen focus, and Sirotkin?s F1 commitments are parallel to working on a new LMP1 project in association with ART Grand Prix.

Shwartzman is clear where his current aim is, however.

Given the strength of the Formula Renault Eurocup in 2017, and how Shwartzman has proven himself to be as quick as anybody out of the traps, it?s hard to argue with that just now. 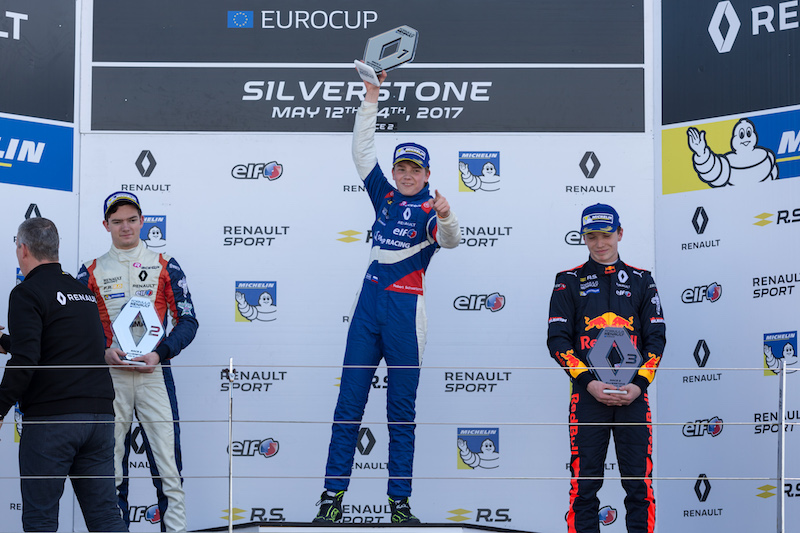 …beating team-mate Palmer to the race two win at Silverstone