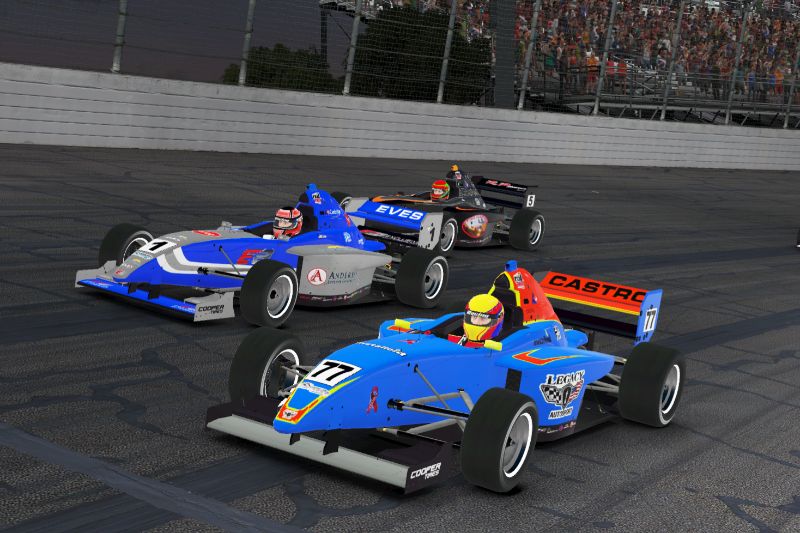 Turn 3 Motorsport boss Peter Dempsey beat Castro to top spot in qualifying, but the Irishman’s bad luck continued as he was denied a shot at victory in both races by being taken out in incidents that weren’t his fault.

He kept the lead for two thirds of the first 20-minute race, with Castro always on his tail but waiting a long time before trying a lunge down the inside.

Once Castro did they ended up traded top spot over several of the sub-19 second laps, until Kaeser’s team-mate Jack William Miller ended a crash by landing in exactly the space of track Dempsey was in. Somehow, Dempsey was able to continue several laps down.

Just six laps were still on the lead lap by this point, with a pace-car requiring crash taking out much of the lower half of the field at the end of the first third of the race.

A spin for Pabst Racing’s Hunter McElrea, that also ended up with Kaeser crashing, meant his team-mate Yuven Sundaramoorthy was the last finisher on the lead lap in fourth.

The front row of the grid for race two was taken from the ninth and 10th place finishers, putting Jay Howard Driver Development’s thrice-lapped Keawn Tandon on pole.

Kaeser started second and immediately passed Tandon at the start of race two to claim a lead he would not lose. Lazier also jumped up to second, but oval inexperienced Tandon didn’t lose any more immediate places as the top three broke away from the pack.

It was Castro who was finally able to break the podium trio late in the race, having been battling with Denes and Eves prior to that, but shortly threw it away after striking the stationary Ryan Norman.

Denes and Eves couldn’t close the gap in time to battle for victory as they too passed Tandon, while Lazier was at his closest to winner Kaeser on the final lap when he looked down the inside of Turn 1.

Dempsey started in 15th, and was battling McElrea for a place in the top 10 when the Australia-based Kiwi-American looped it in front of him and he had nowhere to go. This time the damage was terminal.

How club single-seaters have been affected by COVID-19