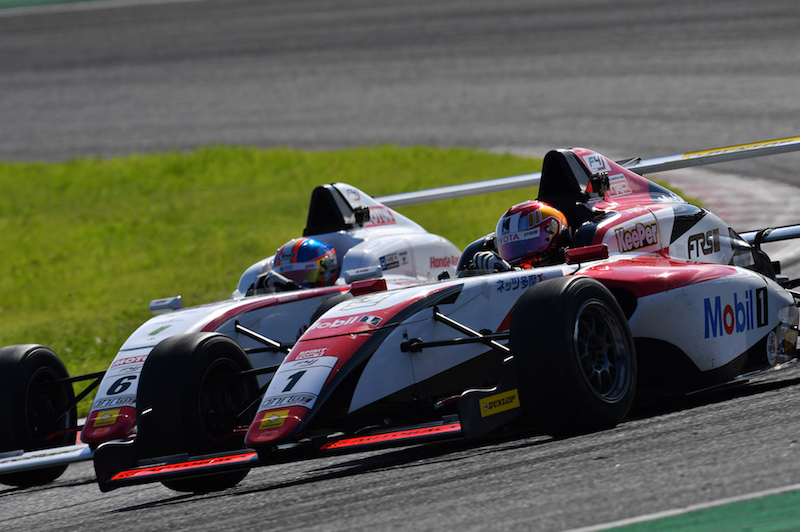 Victory in the first race of the Motegi finale allowed Miyata to take the points lead away from Sasahara, and he sealed the title with third place in the final race, two positions ahead of his rival.

Toyota protege Miyata returned to the series to defend the title he won in 2016 in combination with his rookie campaign in Japanese Formula 3 with TOM’s, where he finished fourth in the standings.

Sasahara, who spent three years racing Formula Renault in Europe culminating in third place in the NEC and seventh in the Eurocup in 2016, earned a place on the Honda Formula Dream Project team through the manufacturer’s Suzuka Racing School scheme.

He led the championship for much of the season after winning the first race at Okayama, before responding to a Miyata double at Fuji with further victories at Autopolis and Sugo.

Sasahara led the standings by 13 points over Miyata going into the deciding round at Motegi, but fell to two points behind following the first race after contact with fellow Honda driver Yuki Tsunoda at the first corner as they fought over third.

The incident delayed Sasahara and left him to finish in fifth place, as Miyata took victory from pole position.

Miyata made a slow getaway from pole in the second race, dropping him to third and putting Sasahara on his tail.

Sasahara however lost a place to Tsunoda later on the opening lap, and soon fell back from the leading quartet with a lack of pace, allowing Miyata to seal the title with third place.

The 18-year-old will now travel to Macau for his debut in the F3 Grand Prix next weekend.

After a podium on a one-off debut in the middle of last season, Tsunoda took third in the points in his first full season, following up a victory in the opening round with two more victories at Fuji and Suzuka later in the year.

Toshiki Oyu finished up fourth after coming third in 2016, but took wins at Autopolis, Fuji and in the final race at Motegi. Takuya Otaki rounded out the top five with a single win at Sugo.

Shinji Sawada came close to winning the final race for the B-Max Racing squad that won this year’s F3 title with Nissan driver Mitsunori Takaboshi, but a lock-up with just over two laps to go allowed Oyu to pounce.

Still, a pair of second-places at Motegi – his first podium finishes – allowed him to climb from 10th to sixth in the standings.