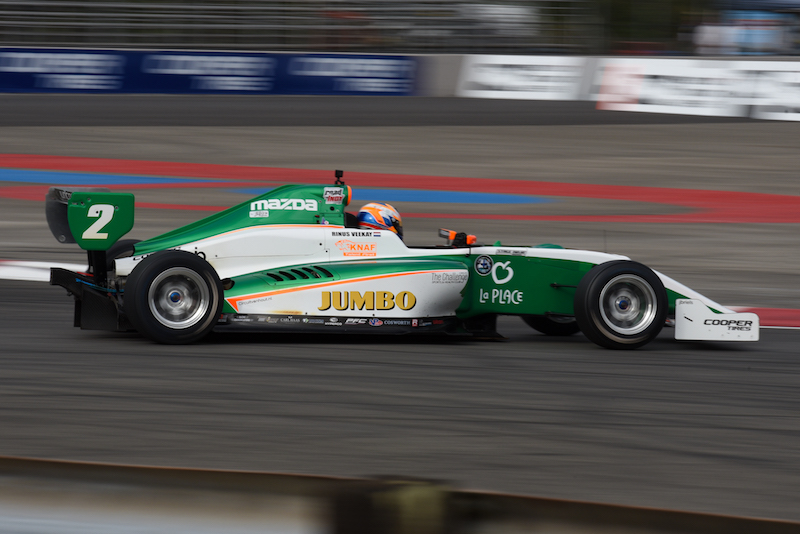 Rinus VeeKay celebrated wrapping up the Pro Mazda title with a second place finish in race one at Portland as Oliver Askew claimed a long-awaited maiden win in the series.

After topping both qualifying sessions to further extend his championship lead, 17-year-old Dutchman VeeKay needed to only start the race to guarantee himself the title.

At the start, VeeKay got swamped, with his Juncos Racing team-mate Robert Megennis making a great launch from fourth to challenge Askew around the outside of the first corner for the lead.

Megennis was forced to take the escape road however, allowing Askew to lead ahead of VeeKay and Parker Thompson.

Askew spent most of the race one second ahead of VeeKay, and responded to a late-race challenge to win by 1.3s.

Thompson, who will finish the season as championship runner-up ahead of Askew, was pursued hard by David Malukas but held on to third.

Megennis was a distant fifth ahead of Sting Ray Robb and Nikita Lastochkin, with Moises de la Vara retiring early on after contact.

The Pro Mazda field has dropped to just eight cars for the final round, having started the season with twice as many of the then-new Tatuus PM-18 chassis.

RP Motorsport has been absent from the final round, following double race-winner Harrison Scott’s pole and podium in the last race at Gateway.