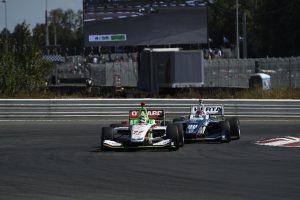 Patricio O?Ward took the 2018 Indy Lights title with his eighth win of the season at Portland, which was secured with a crucial move on title rival Colton Herta.

Andretti Autosport driver O?Ward started from pole and was made to work hard for the win by Andretti stablemate Herta, who passed O?Ward for the lead on lap five of 35. Herta then proceeded to pull away, but O?Ward came back at Herta with a scintillating lunge into Turn 1 towards the middle part of the race.

The move, where light contact was made between the two cars, forced Herta to viciously jump over the kerbs. Post-race the American demonstrated he was not impressed by the championship-deciding move.

O?Ward won the race by 1.6867 seconds, and although Herta can equal the Mexican on points if O’Ward skips the final race, O’Ward’s eight wins to Herta’s current tally of four means the former cannot beaten to the title.

Victor Franzoni secured his first podium since his breakthrough Road America victory in June by finishing third. The Juncos Racing driver overtook Belardi Auto Racing?s Aaron Telitz on the opening lap and held position through the race. Telitz’s team-mate finished fourth, consigning himself to his worst Indy Lights season of his career after finishing second in the standings for the last two seasons.

Telitz finished a lowly sixth after being passed late on by Gateway winner Ryan Norman.

Andretti driver Norman pressured Telitz throughout the race, eventually making a move stick with just a handful of laps to go into Turn 1, which proved to be a popular overtaking spot. Norman’s team-mate Dalton Kellett finished seventh, with championship returnee Heamin Choi in eighth and last. The Juncos driver started from the pitlane and finished five laps down.