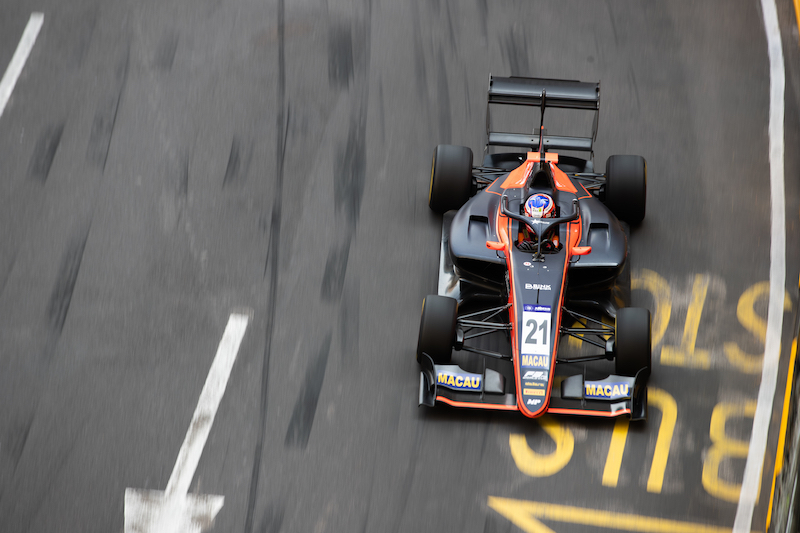 Verschoor started fourth on the grid, but utilised the slipstream heading towards Mandarin to draw alongside FIA F3 champion Robert Shwartzman and Christian Lundgaard.

They went three-wide, with Prema’s Shwartzman and ART Grand Prix’s Lundgaard making light contact with each other and Verschoor passing both on the inside. Shwartzman?s wing was damaged, which caused a puncture and put him out on the spot.

On the restart, ex-Red Bull junior Verschoor was unfazed by current Red Bull protege Vips weaving across the track, and used the slipstream to pull off the crucial move around the outside heading to Lisboa.

There was a virtual safety car intervention for Sophia Floersch?s HWA Racelab car coming to a halt on the first of the long straights.

Vips tried several times in the closing laps to repass Verschoor but was unable to find a way through. That was not without pushing ? there were a few occasions where he nearly hit the wall.

Verschoor won the 15-lap grand prix by less than a second at the end from Vips and Carlin’s Logan Sargeant – another Macau debutant – who pulled off a mega move on Lundgaard at Lisboa right before the VSC was called.

Verschoor’s team-mate Liam Lawson was seventh after holding off fellow Kiwi Marcus Armstrong ? who battled from 17th on the grid – with David Beckmann (Trident) and Frederik Vesti (Prema) rounding out the top 10.

Reigning Macau winner Dan Ticktum managed to work his way up to 13th from the back of the grid to round off a troubled weekend.