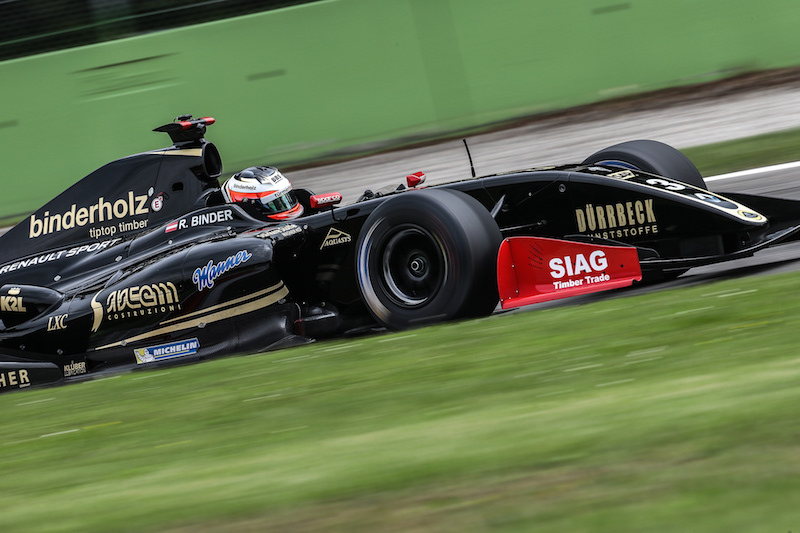 Rene Binder crossed the line seven seconds ahead of Roy Nissany to take his second win of the weekend and the 2017 Formula V8 3.5 season, moving him into the championship lead.

Binder took over?the race lead after the mandatory midrace pit stop, and set about building up a gap to Nissany in second.

At one point, the Lotus driver was over 15 seconds ahead, but a series of fastest laps from Nissany closed the gap. The RP Motorsports man ran out of time though before he could get close enough to launch an attack, and finished second.

A three-way fight decided the final step of the podium. Pole-sitter Pietro Fittipaldi fell back to third off of the line, and?Konstantin Tereschenko soon took the position.

After an early safety car period, Yu Kanamaru found a way past both drivers, and held off attacks from Tereschenko and Fittipaldi to take the final step of the podium – his first in the series.

Fittipaldi finished fourth, while Tereschenko looked set for fifth but received a penalty for gaining an advantage off track. He dropped back to seventh, behind Matevos Isaakyan and Nelson Mason.

Four laps later, Damiano Fioravanti and Egor Oruduzhev came together at the exit of Lesmo. Fioravanti was left stranded and the safety car was brought out to clear the incident.

Oruduzhev managed to return to the pits, but the damage to the front of his car forced him to retire.

As soon as the race restarted, Giuseppe Cipriani dived into the pits. The pit stop came before the pit stop window opened, though, and he was awarded a minute-long time penalty.

The next incident came just as the pit stop window opened. Alfonso Celis span in Ascari and found himself stranded on the track. Luckily for those fighting for position, only yellow flags were needed to clear the car.

The erstwhile championship leader falls to fourth in the standings though, 23 points behind Binder who has 17 in hand on Nissany with Fittipaldi a further five back.