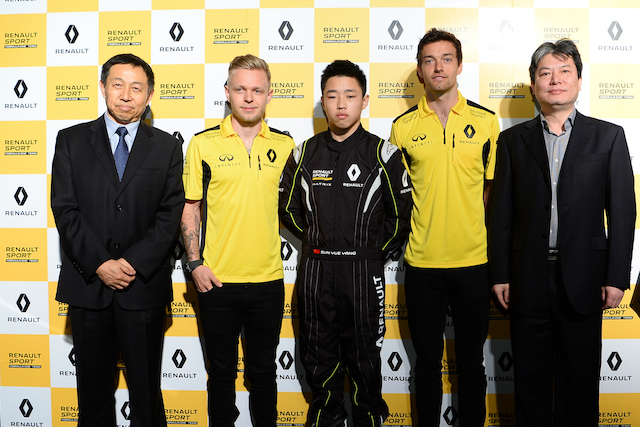 Renault has become the second Formula 1 team to formally sign a young Chinese driver to its books after ?15-year-old karter Sun Yue Yang was added to the Renault Sport Academy.

Sun has been racing with top karting team Ricky Flynn Motorsport since 2014, and last year finished fifth in the WSK Champions Cup and sixth in the Super Masters Series in the KF Junior category. This year he’s moved up to the revamped?OK senior class.

Renault said Sun?has been signed to a multi-year deal, and will make his single-seater debut at the end of the year.

Sun follows compatriot Guan Yu Zhou in being signed by an F1 team while still in karts. Ferrari protege Zhou moved onto single-seaters last year, finishing second in Italian Formula 4, before scoring a podium on his debut weekend in Formula 3 earlier this month.

The announcement of Sun’s signing was made ahead of this weekend’s Chinese Grand Prix, as part of Renault’s “plans to stimulate the development of the burgeoning Chinese motorsport scene”.

Renault Sport racing director Frederic Vasseur said that in addition to developing drivers, “the Academy is also a tool for the Renault markets to better engage with motorsport within their own regions.

“We are pleased and proud to give Renault China the opportunity through the Academy to bring Yue Yang through the ranks.

“Yue Yang has shown strong potential in WSK to, with the right preparation, work his way to Formula 1. The opportunities for both Yue Yang and Renault China to benefit from this partnership are huge.”