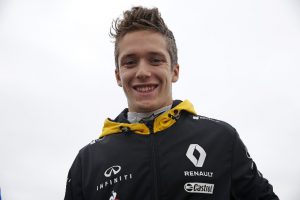 Fenestraz won the Formula Renault Eurocup last year, earning himself the backing of the F1 team, and stepped up to European F3 this year after a successful end of season cameo in 2017 and a seventh place finish at the Macau Grand Prix.

The Franco-Argentinian started 2018 with a win at Pau, but has only been on the podium twice since and sits 11th in the standings for Carlin.

?First of all, I would to say a big thank you to Arden Motorsport for their confidence in the last two rounds on the calendar,” said Fenestraz, who will compete at this weekend’s Sochi event and the season closer in Abu Dhabi.

“As everything will be new for me, my main aim will be to learn and gather as much information as possible. I?ve already begun preparing by finding my marks on the Sochi circuit on the simulator. I think that the most difficult thing will be managing the Pirelli tyres so I?m going to work hard on this point and try and adapt as quickly as possible.”

Fenestraz replaces Julien Falchero, who has failed to score any points in 2018 and is currently 21st in the standings. It was the Frenchman’s second season in GP3, having finished 15th last year with Campos Racing.

“It?s always difficult to aim for a good result when you arrive in the middle of the year,” said Fenestraz. “Nonetheless, I?ll do my best and I?ll seize the slightest opportunity I can. It will be an extremely interesting experience and it?ll be great to share weekends with F1 again since my wins in Monaco.?

In 2016 and ’17, Fenestraz won the F1-supporting Eurocup races at Monaco. Fenestraz also has five wins in the Formula Renault Northern European Cup over those two years, and won three times on the way to second in the French Formula 4 standings in his first year in cars.