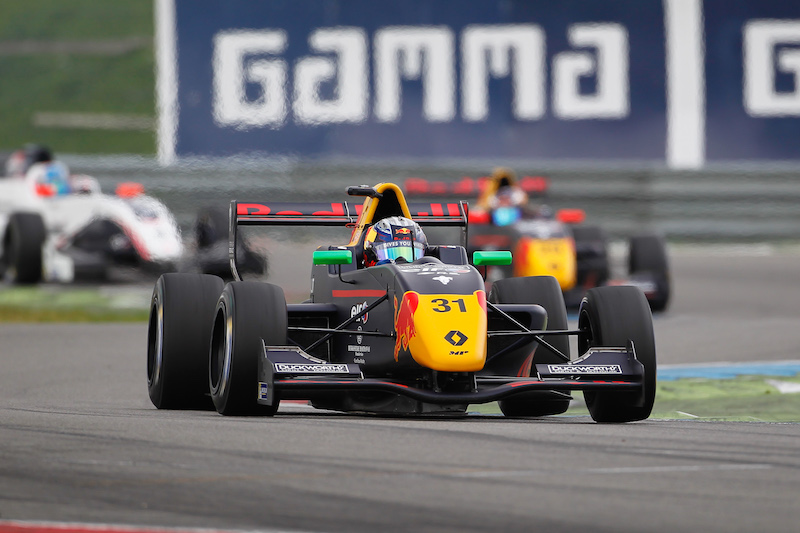 R-Ace GP’s Gilles Magnus threatened to upstage the MP Motorsport trio of Verschoor, Verhagen and Jarno Opmeer on the Dutch team’s home soil after he topped both qualifying sessions.

In race one he jumped the start, forcing him to serve a drive-through penalty and leaving him down in seventh, but he led much of race two under pressure from Verschoor.

A mid-race safety car momentarily took the heat off Belgian Magnus, but Verschoor remained close after the restart and eventually forced his way through into the chicane at the end of the lap with less than two minutes left on the clock,?to the delight of the large crowds at the Gamma Racing Days event.

Renault Sport Academy racer Opmeer completed the podium after a pass on Verhagen at the restart, capitalising after the American ran wide at Turn 1 before the pair then ran side-by-side through the following turns.

Verhagen had claimed the spoils in the first race, getting ahead of stable-mate Verschoor at the start to then lead once Magnus served his penalty on lap three.

After falling back from his team-mate, Verschoor finished just ahead of R-ace GP driver Charles Milesi, who would run third again during race two.

The Frenchman was passed by Verhagen on lap four and on the following tour came to a stop at Turn 3, with the safety car eventually scrambled to recover his car.

Just eight drivers contested the event, with the MP trio the only Eurocup drivers to join the four R-ace GP drivers and privateer Bartek Mirecki.

In race two Mirecki beat Michael Benyahia and Theo Coicaud to fifth place, after contact with Opmeer left him sixth in race one as Benyahia finished on the Dutchman’s tail.