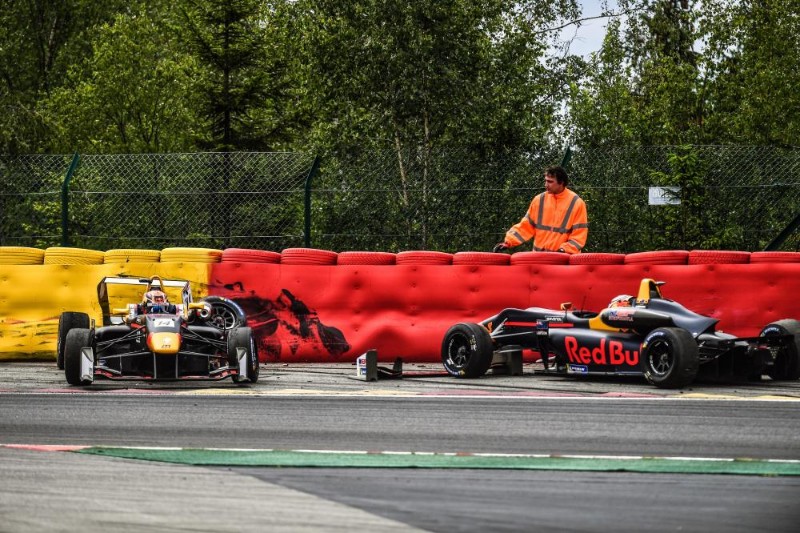 Red Bull juniors Liam Lawson and Yuki Tsunoda have shed light on the crash between the pair while fighting for the lead of the second Euroformula Open race at Spa-Francorchamps.

Lawson was leading the race going into the third lap, having started from fifth on the grid, and was passed by Motopark team-mate Tsunoda at the start of the Kemmel Straight.

He had enough speed to fight back at the end of the straight, and attempted an overtake around the outside of Tsunoda at Les Combes. He ended up on the kerbs, before colliding into his team-mate and putting both in the barriers.

“I passed him after Turn 4 [Raidillon]. I was in front, and I just turned at Turn 5 but he was still, I don’t know why, trying to pass me at Les Combes,” Tsunoda told Formula Scout.

“I could see him he just put his nose and front tyre in – it would still have been impossible to pass me. But still he went [for a move]. That time I didn’t think that Liam would come at Turn 5, but he comes and just crashed it.”

Poleman and Motopark team-mate Marino Sato inherited the lead from the crash, and took his fourth win of the season. With both of the Red Bull-backed cars non-scoring, it leaves them both over 50 points behind in the standings.

“We’ve been struggling all weekend with pace. Quali pace has been really bad the whole time, so I focused on basically getting as good a start as I could,” Lawson said.

“I managed to get the lead, but I could see straight away we didn’t have enough pace to stay there. I should have really just stayed behind, but I went to try to pass around the outside.

“Got pulled on to the kerb on the way in, basically sucked me offline completely, then after that I tried to get out if it, but it was too late.”

Lawson’s belief he wouldn’t have had the pace to fight for the win later on was backed up by his race one performance, where he climbed from eighth to third on the opening lap but then made no further progress.

“The whole race was just done on the first lap. Again, we didn’t have any pace. So once I got there it was a struggle for the whole 13 laps.”

Motopark team principal Timo Rumpfkeil also had an opinion on the collision, which is the second this season to have involved the pair. At Paul Ricard the damage was not terminal for either car, but in Pau it was a different story as Lawson ended team-mate Julian Hanses’ chances of Pau Grand Prix victory when they collided.

“I think [Lawson] he came up a little late,” Rumpfkeil told Formula Scout.

“Around the outside there is difficult, and he didn’t have enough momentum to really go all the way outside so he should’ve given Yuki the corner earlier on. For me it’s definitely been Liam’s fault.”