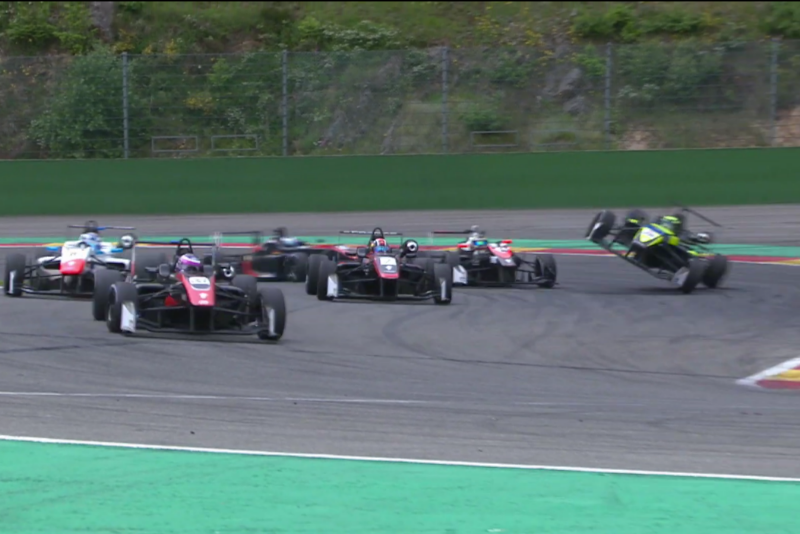 Linus Lundqvist drove to seventh in the second Euroformula Open race at Spa-Francorchamps despite ending the first lap on two wheels and sustaining substantial floor damage.

The Double R Racing driver started in 12th, but had made it up to sixth place on the opening lap before RP Motorsport’s Javier Gonzalez pitched him onto two wheels at the chicane.

The hit, and subsequent landing, damaged Lundqvist’s floor to the point where it was flapping at the rear, and left him at the back of the pack.

“It was a very interesting race for me,” Lundqvist said.

“Didn’t have the best of starting positions in 12th, but did a really good first lap and I was running sixth when I just made contact with a driver down at the chicane.

“He literally just drove into the side of me and I ended up on two wheels. Nearly flipped.”

After making the hit, Gonzalez went on to finish eighth. Post-race he was handed a five-second penalty that dropped him to 12th, promoting Calan Williams (Fortec Motorsports), Pierre-Louis Chovet (RP Motorsport) and Aldo Festante (Teo Martin Motorsport) in the points paying positions.

“I Went back to the end of the field, and luckily caught the back of them because of the safety car period,” added Lundqvist.

“I don’t think I’ve ever done this much overtaking in a race ever before, so it was very exciting. We had a bit of floor damage as well.

“Our straightline speed was very good, but the cornering wasn’t that good. But as long as I could keep up with the cars ahead in the middle sector, then it was fairly cool in the first and last sector.

“Very dissapointed not to have finished higher, because I think the speed we had today we should’ve ended up on the podium. Bit of a mixed feeling.”

Lundqvist’s seventh place puts him seventh in the standings, just one point behind team-mate Jack Doohan. Gonzalez had picked up RP Motorsport’s first points of the season in the opening race, with the team having skipped the last two rounds to switch from Piedrafita to Spiess engines.