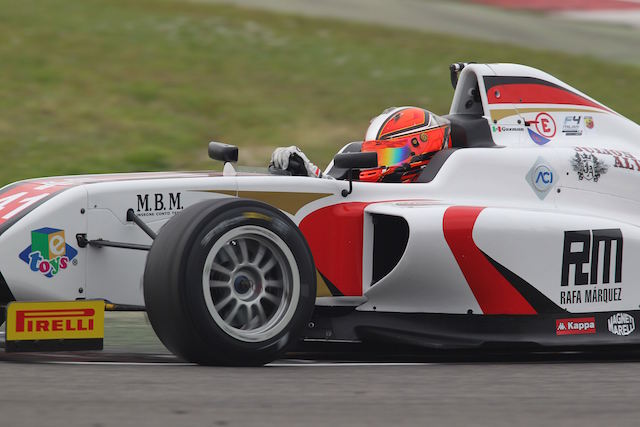 The DR Formula racer started only seventh, but managed to gain a place at the start after Diego Bertonelli stalled from fourth on the grid. That caused a chain reaction with several cars from the back crashing into the Italian, causing a red flag.

On the restart, the two Jenzer cars of Marcos Siebert and Job van Uitert got away well from the front row, as did Yan Leon Shlom and Guzman, the Mexican moving up to fourth.

Guzman passed Shlom two laps into the restart, and began rapidly closing in on the two Jenzer drivers, overtaking van Uitert for second on lap eight, before arriving on the rear of polesitter Siebert two laps later.

The Argentine defended vigorously, and it took an inspired dash up the inside of the last corner on lap 12 to earn Guzman the lead. Siebert attempted to repass his fellow sophomore, but was forced to settle for second after a spin by Jaden Conwright ended the race a lap early.

Third went to van Uitert, ahead of Russian driver Shlom. Prema’s Juri Vips had an up-and-down race, stalling on the initial start?but regaining his spot due to the first red flag, only to get away slowly again, fighting back up to fifth at the end.

Mauricio Baiz took sixth ahead of Giacomo Altoe. Ian Rodriguez?recovered to eighth after losing out at the start, while a late spin for Kevin Kratz handed ninth and tenth to Sebastian Fernandez?and Kush Maini.

The final race takes place later today, with Mick Schumacher starting on pole after amassing a maximum of 50 points from the qualifying races. Guzman will start second, ahead of van Uitert, Siebert and Juan Manuel Correa.