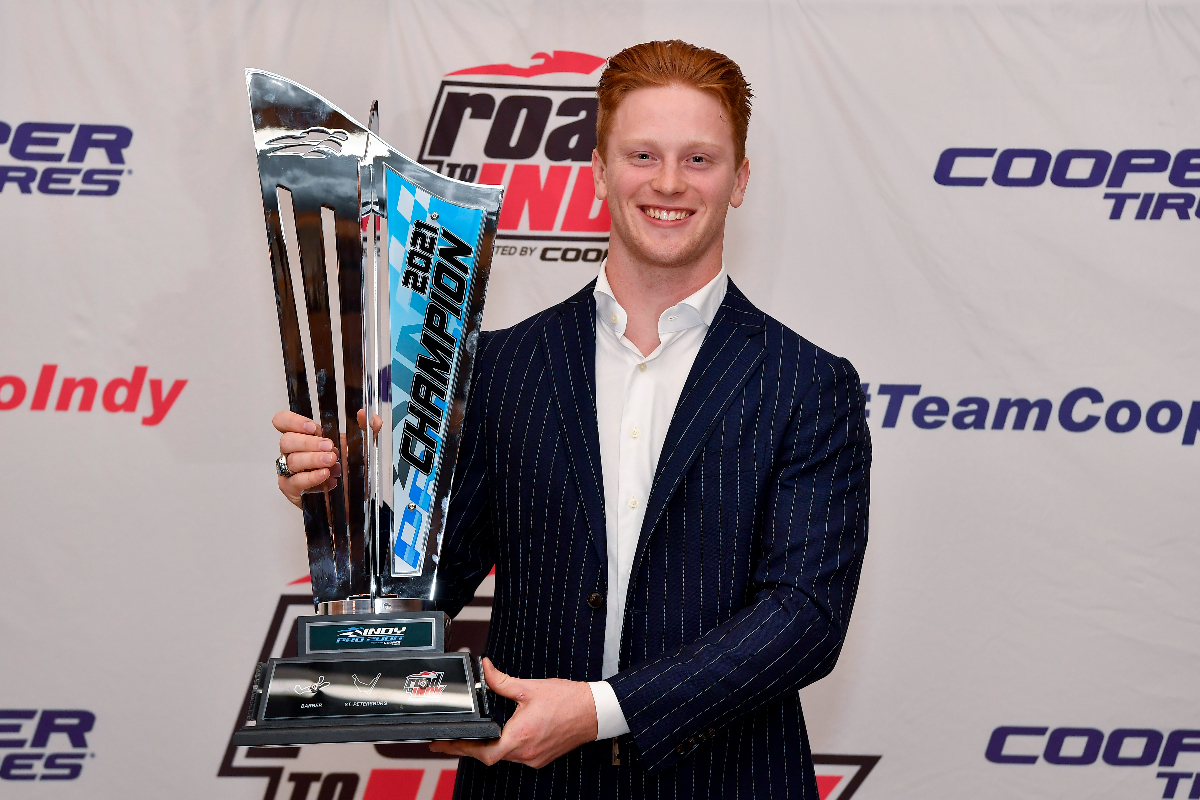 Indy Pro 2000 champion Christian Rasmussen has given a hint regarding his 2022 Indy Lights programme, as he targets a third successive Road to Indy title.

Rasmussen won back-to-back titles with Jay Howard Driver Development in USF2000 and IP2000, but revealed on this week’s Formula Scout Podcast that he will be moving away from the team for next year .

JHDD did compete in Indy Lights this season, co-running Carlin’s cars, but does not have chassis of its own that it would plan to enter into the series yet.

“Jay doesn’t have an intention to do Lights directly with his team right now” Rasmussen explained.

“So I had to figure something else out [for 2022]. I’m kind of going away from my family from the past four seasons, so it’s going to be different.

The two frontrunning outfits in Lights in 2021 were Andretti Autosport (which included the George Steinbrenner-owned satellite car) and HMD Motorsports (which also co-ran two cars with Global Racing Group), while Juncos Hollinger Racing also made the podium a few times.

Rasmussen is set to have his first Lights test on Indianapolis Motor Speedway’s road course with an as-yet-unidentified team at the end of this month.

“We have the Chris Griffis [Memorial Test] at the end of the month, so we’re doing that, and then hopefully we’ll be able to do a lot of testing to prepare for next year,” he said.

“It’ll be a lot of testing, right now we’re negotiating contracts for next year, looking at our opportunities. It’s going to be exciting.

“I’ll have plenty of testing this winter to figure [the car] out, so even if I’m not on the top of the charts in a couple of weeks time at Chris Griffis at IMS, I’m sure I’ll get there.”

After IndyCar-bound Kyle Kirkwood completed his Road to Indy title treble this year, Rasmussen is also in contention to complete the rare feat of USF2000, IP2000 and Lights titles, albeit not taking the USF2000 title as a rookie as Kirkwood did.

He is targeting a third title in as many years though, something which Kirkwood could not do.

“That’s definitely the goal,” Rasmussen said. “We will see what we can make happen.”

You can listen to our podcast with Rasmussen below, or find it on Breaker, Google Podcasts, Overcast, Pocket Casts, RadioPublic, Castbox, Apple Podcasts and Spotify.