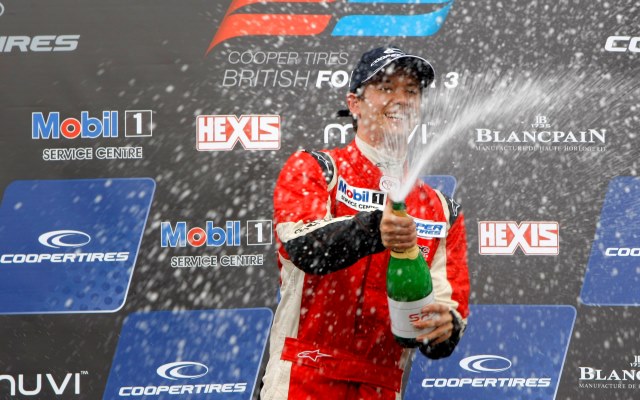 Sam MacLeod was unable to complete a clean-sweep of victories at the British F3 opener at Rockingham after crashing out on lap one, handing victory to Fortec team-mate Matt Rao.

MacLeod began the race from pole but got a poor start compared to Rao, who had missed out on topping qualifying by just 0.002 seconds but harmed his results earlier in the weekend with incidents in race one.

This time it was MacLeod who would drop the ball, clipping Rao in the first braking zone of the race at the turn two Deene hairpin. That caused him to retire on the spot, but Rao was able to continue and open up a 14 second advantage over the rest of the field on his way to victory – his first outright win in car racing.

Martin Cao fell to the back of the pack at the start but was able to fight his way back through the order by lap six to complete a treble of runner-up places.

Holding second until being passed by Cao, Andy Chang dropped back at a rate of two seconds per lap but managed to hold on to the final podium spot despite having the remaining cars of Camren Kaminsky, Alice Powell and Peter?Li on his tail for most the race

Chang’s cause was helped by his pursuers scrapping, with Powell managing to overtake Kaminsky on lap 10. Powell was unable to put a move on the second Double R car of Chang though, and later began to drop back before pitting with an exhaust issue with two laps left. Kaminsky was able to catch back up to Chang again as he finished fourth, with Li completing the finishers in fifth a couple of seconds further back.