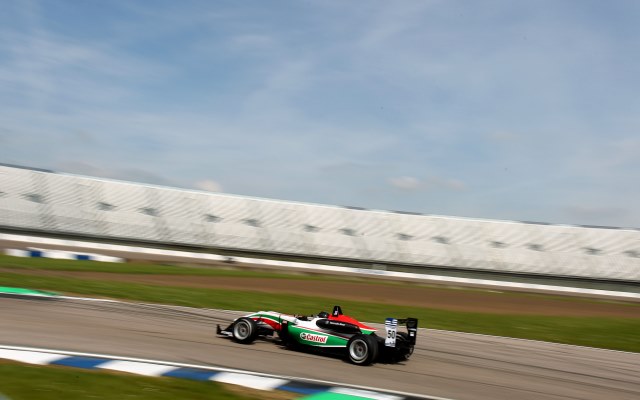 Sam MacLeod surged from fourth to first on the first lap to score his second win of the British F3 opener at Rockingham.

With the top four finishers in race one reversed to form the grid for race two, MacLeod started back in P4 but again demonstrated his dominance over the field to move into the lead immediately at the start.

He quickly built up a comfortable margin over the opposition before easing off towards the end, crossing the line 3.4 seconds ahead.

Martin Cao again finished second after a good start of his own, but had Alice Powell and Matt Rao on his tail at the end of the race. After complaining after race one that her older-spec F308 couldn’t keep up with the F312s, Powell put a move on the newer model of pole-sitter Camren Kaminsky to claim third place, and kept a charging Rao at bay to keep hold of the final podium spot.

Rao had started last after his incident with Peter Li in race one, and initially dropped a couple of seconds behind the pack during the early laps. The Fortec driver hit his stride though, passing Li on lap eight, Andy Chang on lap 10 and Kaminsky on lap 12. He was unable to find a way past Powell in the remaining 11 laps, however.

Double R team-mates Kaminsky and Chang were unable to make the most of their front row starts and could only finish fifth and sixth respectively, with Li finishing on Chang’s tail in seventh.