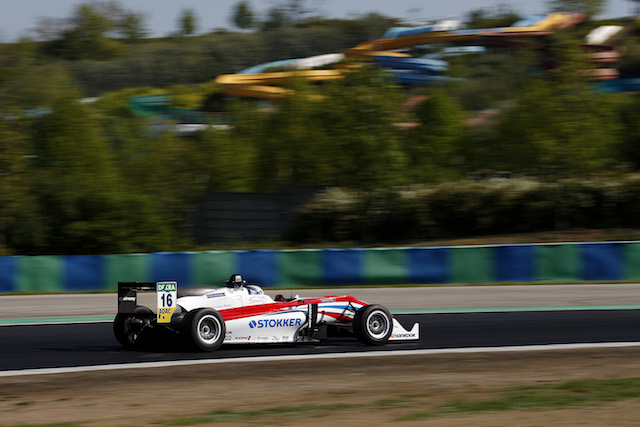 Formula 4 graduates Ralf Aron, Niko Kari and Joel Eriksson locked out the podium on just their fourth starts in the?FIA Formula 3 European Championship after getting to the front in an incredible first race at the Hungaroring.

It was?George Russell?who took the lead at the start with a better getaway than?Maximilian Gunther, who was forced down to fourth behind Prema team-mates Aron and Lance Stroll.

In the space of three laps though, Aron cut that gap down to nothing and began forcing Russell to defend, eventually getting past at the chicane.

He then pulled away at a remarkable pace, building a lead of 10 seconds as Russell – struggling with his tyres on a newly-resurfaced Hungaroring – defended from Stroll, Gunther, Eriksson and Kari behind him.

While?Stroll tried?but failed to find a way past Russell for several laps, Kari went from the back of that group to the front, managing to get down the inside of Russell at Turn 1.

Russell’s tyres screamed enough later that lap and he was pushed all the way back to 10th before later pitting, where his team inspected his tyres.

Kari meanwhile quickly set about cutting the gap to Aron, but the SMP F4 champion ultimately finished 1.5 seconds behind the Italian F4 champion.

With none of Aron’s Prema team-mates able to show a similar kind of pace, Stroll finished a distant fourth at the end of a 10-car train at the flag.

Nick Cassidy appeared to have a similar race to Russell, unable to keep up with the leading six during the early stages and holding a large queue behind him before pitting. He does however retain the championship lead ahead of team-mates Stroll and Gunther.

The action-packed but clean race quickly shone the championship in a more positive light?following the overnight news that?Nikita Mazepin?would be banned from the opening race for a paddock altercation with Ilott.