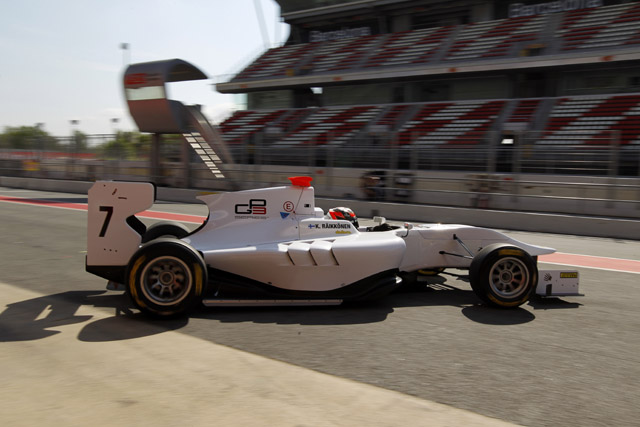 The Finn got behind the wheel as part of an official development test by the series in preparation for the 2014 season, but took part thanks to a relationship with compatriot and Koiranen team boss Afa Heikkinen.

Raikkonen completed 58 laps with a best lap time of?1m34.780, as he tried out the car on the different Pirelli tyre compounds and also assisted with looking for a solution to the lack of overtaking that has affected the category this year with its second generation car.

“I wanted to test the GP3/13 because my friend Afa Heikkinen has a team in this series and I have been closely following their progress and results since the beginning of the season,” said Raikkonen, who contested just one full season of Formula Renault 2.0 before he made his F1 debut in 2001.

“I was curious to see how the car handled and it was actually fun to drive. There were a few issues regarding its behaviour, but we managed to solve most of them.

“The GP3/13 is a very good tool for young drivers, especially when you have to learn about tyre management like we have in F1.”

“We are extremely pleased to have had the opportunity to work with Kimi today,” said Perrin. “His experience and feedback were invaluable and they gave us a better understanding of what needs to be done in order to make our car a better tool in overtaking opportunities for next season.

“He has confirmed all our hypothesis, and together we could start working on two development directions for the end of season testing. We would like to thank Kimi for testing with us today and Koiranen GP for helping make this possible.”

The GP3 season resumes at Spa-Francorchamps next weekend (24-25 August).

Karthikeyan gets third Auto GP pole in a row at Nurburgring