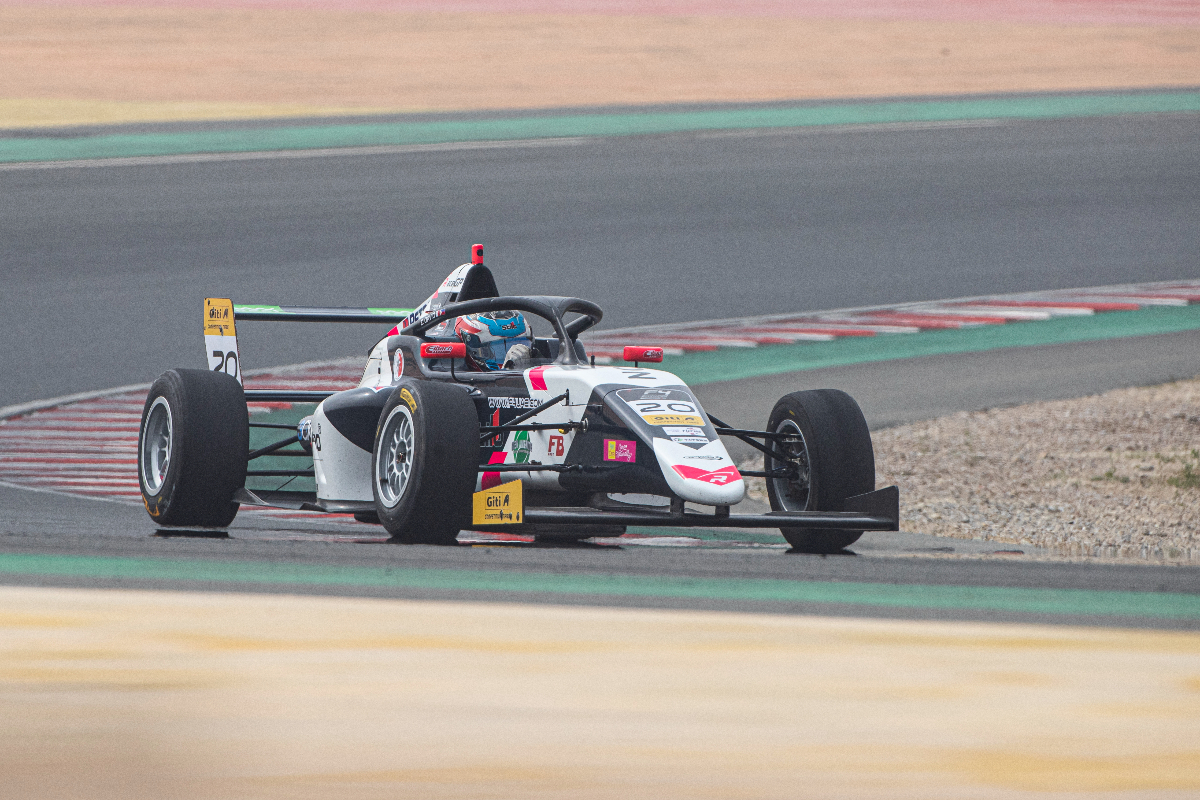 R-ace GP’s Zachary David was fastest in two out of three sessions on day one of pre-event testing for the Formula 4 United Arab Emirates championship at Kuwait Motor Town.

The circuit is the first in another country to be visited by the series, and will host the next two rounds of the 2023 season.

David topped the opening session, marking the first organised single-seater track action in Kuwait, with a 1m56.353s lap. It put him just 0.097 seconds clear of MP Motorsport’s Valerio Rinicella, and with the top 11 covered by a second on pace.

The first representative laptime set in the session, after drivers got a feel for a track that was totally new to them, was set by Rinicella after 10 minutes and was a 2m01.011s. He went two tenths faster on his next lap, then disputed top spot with Sainteloc Racing’s Theophile Nael.

The pace was brought down to 1m58.822s, and a while later there was another battle to be fastest between David, Carlin’s Dion Gowda and PHM Racing’s Valentin Kluss who ended the first half of the sesson on top with a 1m58.225s lap.

Further improvements came in with 15 minutes remaining, with PHM’s Noah Stromsted going fastest. David reacted by being first into the 1m57s, then Stromsted went fastest again. David bettered him again, breaking into the 1m56s, then was knocked off of top spot by Rinicella. He reclaimed first place with his penultimate lap.

Rinicella topped session two, leading the way by 0.755s over Mumbai Falcons’ Tuukka Taponen with a 1m55.261s effort. Taponen’s team-mate James Wharton and Nael were the only other drivers within a second of Rinicella.

The session was interrupted early on by a red flag caused by Sainteloc’s Luciano Morano, and team-mate Nael was first to the top.

Rinicella, Taponen and then Rinicella again got a second lower in laptime in each of their stints at the top, before James Wharton held the fastest lap for 34 minutes through a second red flag stoppaged caused by Cram-Hitech GP’s Flavio Olivieri.

Taponen lowered the pace by 0.082s when track action resumed, with Rinicella going 0.009s faster than that and then setting the first sub-1m56s lap.

David and Jesse Carrasquedo Jr, who was third in session one, Stromsted and Gowda were among seven drivers who failed to set a personal best lap in session two.

Track limits abuse became an increasing issue in session three as drivers got more used to the track, and David became the only driver to go sub-1m55s as he went fastest again ahead of Rinicella and Wharton.

Nael, Kluss, Wharton and Rinicella all took turns at the top during the session, and the only non-improvers were Jack Beeton, Kanato Le and Sebastian Murray.