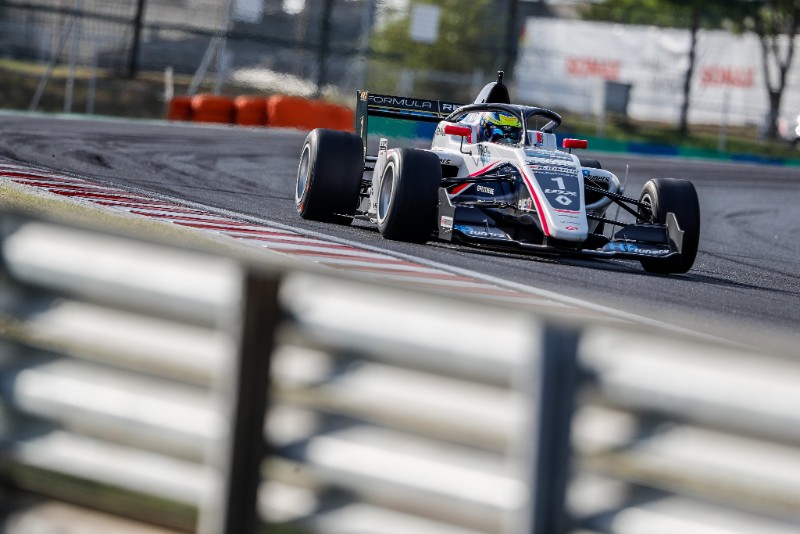 R-ace GP continued its strong run of Formula Renault Eurocup form by locking out the top three places in free practice at the Hungaroring.

A day of private testing took place at the circuit before practice began, and R-ace GP already looked ominously quick.

Come the start of the official sessions it was Arden’s Alex Quinn who set the initial place, in the second weekend of his return to single-seaters.

Arden’s Eurocup resurgence extended to Frank Bird, who was frequently trading times in the top three with his team-mate or one of the R-ace GP drivers.

A radio failure meant the morning session was red flagged, and when it restarted Quinn kept his place at the top. Only in the last 10 minutes was he displaced, with JD Motorsport’s Leonardo Lorandi the first to seize the position from him.

Championship leader Oscar Piastri was next to better Quinn, who responded twice to further improvements from the Australian. Eventually R-ace GP proved too strong through, and Piastri ended the session on top ahead of his team-mates Caio Collet and Alexander Smolyar.

PIastri was quicker to reach first place in the second session, with title rival Victor Martins recovering from a underwhelming morning to also get involved at the front.

There was little in improvements for much of the time given, with Martins and MP Motorsport team-mate Lorenzo Colombo filling the top three behind Piastri until the final six minutes.

Once again there was a flurry of late improvements, with Collet snatching first place from an unworried Piastri. Smolyar edged JD Motorsport’s Leonardo Lorandi and Ugo de Wilde to second, with Quinn showing Arden’s pace again by completing the top five.