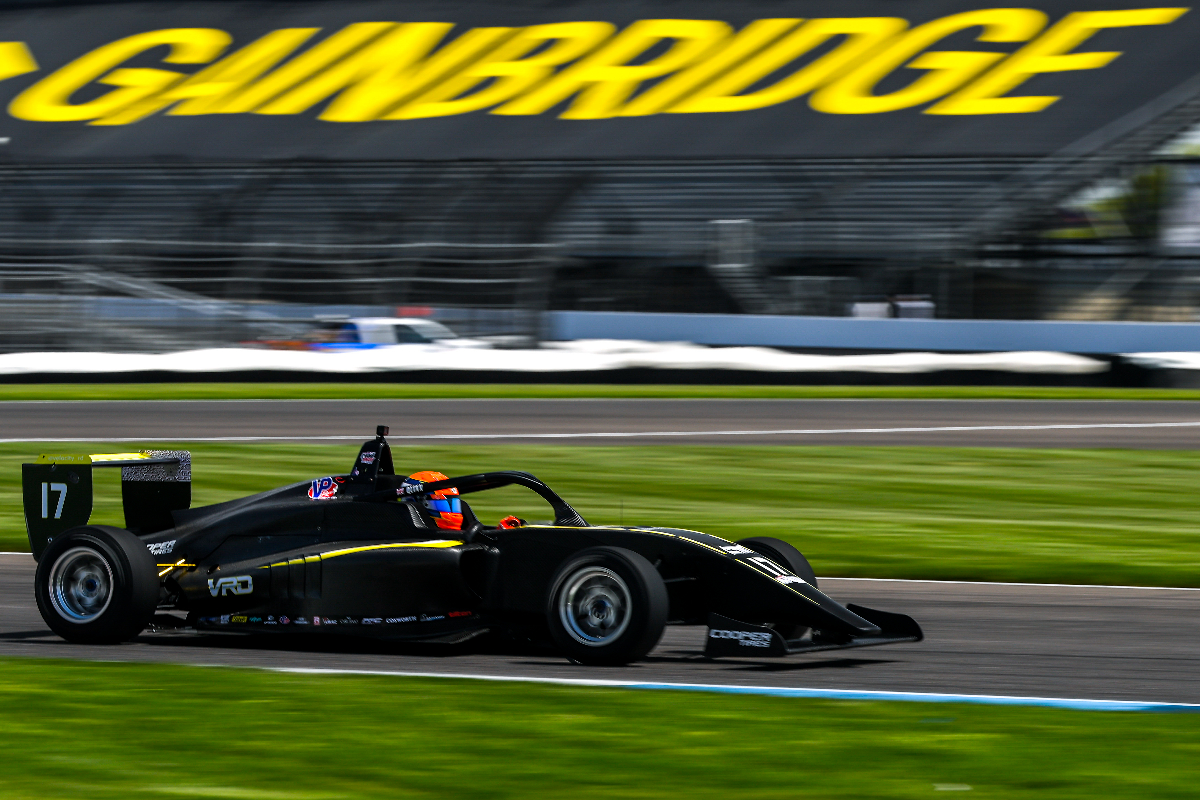 Alex Quinn claimed his and Velocity Racing Development’s first USF2000 win on his first start in the series at Indianapolis Motor Speedway.

Jagger Jones beat Quinn to pole on the circuit’s road course and spent most of the race battling with the Briton for the lead between the frequent pace car interruptions.

The first came on the opening lap as Nicky Hays lost his front wing on the rolling start, and Jones retained his lead while pre-race points leader Myles Rowe jumped from seventh to second and Simon Sikes went from eighth to fourth.

Rowe passed Jones on the restart lap, but a battle with Quinn then dropped him to third where he came under pressure from main title rival Michael d’Orlando who would make contact at turn four and send both off. The second caution period was called off the back of their incident, and for Sikes getting into trouble at turn eight, totally shaking up the order up front.

Jones had got back ahead of Quinn, and Billy Frazer had risen from 10th to sit in third. Thomas Nepveu ran in fourth and created a tight lead quartet until he flew over the turn five/six kerbs and his DEForce Racing team-mate Bijoy Garg went off at turn one after picking up damage. To make matters worse for the team, its cameoing driver Chase Gardner had already pitted after he got into trouble and Dylan Christie in the fourth car wasn’t having much luck either.

Garg’s stationary car interrupted the lead battle as another caution period was required, and on the restart Quinn fought past Jones for the lead while Christian Weir (from 14th on the grid) moved up to third.

There were more pitters as drivers behind picked up damage, but the race ran green through the remaining laps and Jones was sucked into a battle for second with Frazer that allowed Quinn to pull away for victory.

Frazer did get ahead, and on the final lap Joes tried getting back past but as they went wheel-to-wheel he was sent onto the grass. He managed to keep control of his car but had to settle for third.